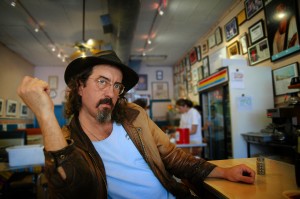 This Austin-based singer-songwriter does not use metaphors or mince any words with his politically charged lyrics. Songs like “Cheney’s Toy” and “We Can’t Make It Here” point a middle finger directly at the maladies of outsourcing, government corruption and its irreversible consequences with no holds barred.

McMurtry (the son of novelist Larry McMurtry) got his first break in 1989 when a demo made its way to the hands of John Mellencamp, who produced his debut disc. He has been a fixture of sorts in the folk music scene performing regularly in Austin with his band, formerly known as The Heartless Bastards.

He is currently on tour promoting his latest CD/DVD combo “Live in Europe,” a document of his first European tour, where he was backed by longtime band members Ronnie Johnson, Daren Hess and Tim Holt. Also appearing on the disc are keyboardist Ian McLagan and Texas songwriter Jon Dee Graham.

For his Chicago appearances, he will do a solo appearance accompanied solely by his own guitar—something he rarely does these days. (Ernest Barteldes)