by Ernest Barteldes
January 13, 2011Filed under: 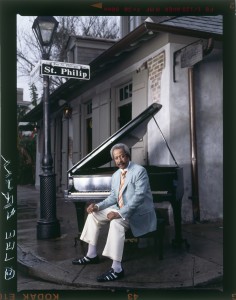 As far as legends go, Allen Toussaint is arguably one of the most underrated of them. A highly gifted pianist and arranger with a knack for great songwriting, Toussaint enjoyed great success during the seventies and eighties thanks to having his songs recorded by the likes of Warren Zevon, Otis Redding and more recently Robert Plant and Alison Krause, who cut a version of his “Fortune Teller” on their 2006 Grammy-awarded “Raising Sand.”

Though his hit-making days are clearly behind him (at least on commercial radio), he remains active in the music scene. He recently collaborated with the likes of Elvis Costello and Paul McCartney (a reunion of sorts, since he worked on the former Beatle’s “Venus and Mars” album in the seventies) and continues to regularly record and perform. A resident of New York City since the aftermath of Katrina, this will be his very first appearance at CSO. He will be backed by Don Byron and trumpeter Nicholas Payton, with whom he recorded his latest album,”The Bright Mississippi.” (Ernest Barteldes)