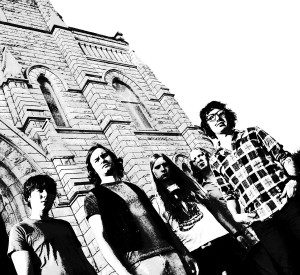 When the average person hears the phrase “psychedelic music,” their mind most likely wanders back to the sixties of Timothy Leary, when Brian Wilson began writing his LSD trips into the fabric of “Pet Sounds” and the drug references were even less ambiguous on the Beatles’ “Sgt. Pepper’s Lonely Hearts Club Band” (to say nothing of the legendary acid-laced headband of Jimi Hendrix). Some few may even point back to the early progenitors, bands like the Holy Modal Rounders, The 13th Floor Elevators and Sweden’s Pärson Sound. In other words, for most, psychedelic music is a thing of the past, the legacy of a lost generation.

People like Drew Kettering, however, are trying hard to fight against that prevailing notion, to prove that psychedelic music is alive and well today. This year marks the second anniversary of The Chicago Psych Fest at the Hideout, an annual festival showcasing local and regional psychedelic acts. Kettering, who plays in local psych combo Great Society Mind Destroyers, started it when he noticed that, while psychedelic rock had a strong and diverse presence in the community, it had little definition as a community itself. “Me and some of my friends were interested in bringing together the psychedelic community that Chicago has and to showcase our different styles and takes on it.”

One of the key aspects of psychedelic rock in Chicago which Kettering celebrates and hopes to demonstrate through the Psych Fest concerts, is this openness to different approaches in psychedelic music. Comparing the scene in Chicago to others around the country, Kettering observes, “a lot of those scenes tend to develop a certain kind of sound whereas in Chicago we’ve all taken different influences into account in how we translate psychedelic music.”

The roster of the upcoming two-night festival reveals as much. Whereas Friday headliners Mondo Drag represent a throwback to the drawn-out space rock of the 1970s, Saturday night’s main act, Moonstone Continuum often lead into their sprawling prog-rock compositions with readings that sound equal parts new-age philosophy and beat poetry. Perennial scene leader Plastic Crimewave Sound (aka Steven Krakow) is a study in diversity in a single man, having had every genre tag from acid punk to drone to freak-folk thrown at him at one time or another. And regarding Friday opener El Is a Sound of Joy, Kettering explains that “Even though they’re more of an acid-jazz, improv group, when I’ve seen them live, they’ve induced a trance which was psychedelic.” 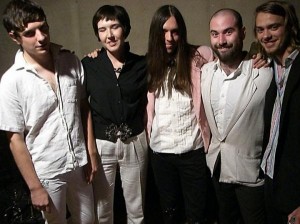 When pressed, however, Kettering admits that there is perhaps one style which stands out more than others in the world of Chicago psych. In Kettering’s opinion, many of the bands on the scene have begun to associate themselves with “cosmic krautrock,” a style which is evidenced by the releases of first wave krautrock groups such as Ash Ra Tempel, Amon Duul II and the Cosmic Jokers, where the sound is “more far out… as if they’re looking for outer-space in their music.” As a prime example of the cosmic krautrock sound feeding into the Chicago scene, Kettering points to Cave, a band which, itself, has influenced the entire psychedelic community in Chicago.

Nevertheless, Kettering wants to place the emphasis on the possibility of psychedelic music in Chicago, and not any particular sound. He of all people knows just how malleable psychedelic sound can be. Great Society Mind Destroyers started out being influenced by late sixties garage rock and the neo-psych of groups like the Brian Jonestown Massacre. But when their original drummer Ralph Darski left the group a year ago to open a café in Logan Square, GSMD picked up Sadhu Sadhu drummer Jim Lechocki and began moving in new directions. Now they’ve expanded to encompass space and kraut rock, moving their sound out of the sixties.

Kettering very much looks toward the future, citing the internet as a source for cross-pollination of influence and styles. “What I’m representing as far as the scene I’m interested in is much more concerned with looking forward rather than backward… With the availability of finding certain music from all over I think people will take that in and recreate their own interpretation of it and it will be something new.”

Kettering has himself recently fallen under the influence of North African acts coming from in and around the Saharan desert, which he references as “Tuareg” music—groups like Group Inerane, Group Doueh and Tinariwen, which build on a cluster of traditional North African styles, playing ragas on electric guitars fuzzed out with distortion pedals. On a GSMD track like “Divinorum,” you can begin to hear characteristic North African finger-work in the guitar drone, like a thin skein resting atop the broiling bass and drum tumult below.

The adaptability of the psychedelic genre, drawing from as many sources as it does, gives it a durability akin to the extra-hardiness of mix-breed dogs. But if Kettering and his ilk have their way, it will not only survive on the fringe, but occupy the center-space of music culture in Chicago.

[…] over at New City, David Wicik previews the festival with an in-depth piece titled Far Out: Chicago Psych Fest celebrates the diversity of our cosmic krautrock and beyond. This entry was posted in happenings, press, shows and tagged Chicago Psych Fest 2. Bookmark the […]

[…] Great Article on This Weekend’s Festival from New City […]