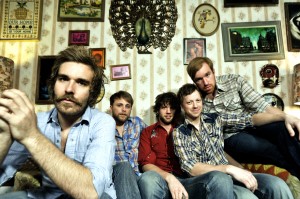 One of the realities about having a band is that you can’t survive for too long without the support of a label—major or indie. That has proven untrue, though, for this Columbus, Ohio-based band, who has soldiered on for well over a decade without any kind of support—until now. After years of being on the road, they were finally signed by Fanatic Records (an EMI subsidiary), which re-released their 2008 album “These Magnificent Miles,” which is considered one of their best to date.

The sole founding member of the band is vocalist/guitarist Scott Terry (though bassist Mark McCullough joined early on), which might explain the musical changes the group has gone through over the years. RWB is rounded out by Greg Rahm (guitar, vocals), Dean Anshutz (drums) and Eric Hall (lap steel guitar, mandolin, and vocals). They describe their sound as “Americana rock ‘n’ roll” and are recognized not only for their fiery live shows but also for the fact that they are one of the country’s hardest-working bands thanks to their relentless touring schedule. (Ernest Barteldes)