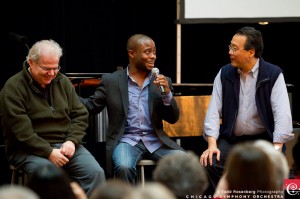 “I am a human being first, a musician second, a cellist third,” said Pablo Casals, a quote that cellist Yo-Yo Ma thinks sums up the Chicago Symphony Orchestra-sponsored “Citizen Musician” initiative that formally got underway over the weekend at various points across the city.

“We’ve had many talks over the years about the purpose of music,” said Ma Saturday afternoon at a Citizen Musician summit at the Cultural Center, looking over at his friend and pianist Emanuel Ax in the audience. “Manny and I have been playing together for forty years, since we were students at Juilliard. Even as students, we used to talk about the purpose of music and I know that for both of us, we make music because the act of doing so makes us feel better as human beings.”

Joining the discussion, Ax concurred. “There is the whole thing making a living as a musician for those of us lucky enough to be able to do that,” said Ax, “so it is a responsibility, but also a pleasure. The most happy moments I have as a musician are those moments when you are with a group of kids in a school classroom and take what has been given to you and make it live in someone else.”

Anthony McGill, principal clarinetist of the Metropolitan Opera who grew up on the South Side and credits the Merit School of Music with forging his career path, agrees. “I have to pinch myself to be sitting here with two of our most cherished citizen musicians. I am a Chicagoan first, then a Bears fan and a clarinetist,” McGill said to applause. “And like many of you,” looking over at young musicians in the audience, “I was where you are and because of the inspiration of hearing guys like the ones sitting next to me, found a passion in my life that I worked really hard at.”

“Kids, like the rest of us, take a great deal of pleasure in accomplishing something,” said Ax, “though many adults tell me that they stopped playing. It’s never too late. And in the case of my instrument, the piano, anyone can hit the keys: it’s not like having to learn about reeds, strings, and bows, like these guys. Take the same pleasure in playing as you would out on the tennis court. Nobody plays like Roger Federer, but we can all take the same pleasure from playing the game.” (Dennis Polkow)

Citizen Musician Weekend: Hanging out with Yo Yo and Manny Ax in the Windy City | Anthony McGill