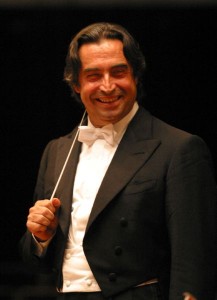 That Riccardo Muti was unable to finish his spectacular inaugural fall CSO residency here due to exhaustion has hung in the air now for months. The only thing that will make that unfortunate episode become a distant memory is for Muti to come back to town and get on with his work here, all as scheduled. That is exactly what he is attempting to do, starting this week for three weeks of winter programs. Slow down and pace himself? There is little evidence of that, and in fact, after a month of rest on doctor’s orders, Muti has been quite busy since we last saw him, not only conducting his first performances with Opera di Roma, but launching an Italian media campaign to promote his new autobiography (no English edition out yet). That blitz included a headline-making appearance on Italy’s most popular television talk show where Muti brought down the house by telling an off-color joke concerning a friend’s remark about what body part he resembled when he first arrived in Milan wearing a hat (he claims to have never worn one since).

The fact that Muti actually offered an encore within an opera to the stunned Rome audience—something he only did once before at La Scala in his entire career—is another sign that Muti is mellowing. CSO CEO Deborah Rutter was in Rome for those performances and says that Muti looked “like a new man, well-rested and fit.” Chicago will have a chance to see firsthand when Muti conducts his first-ever Cherubini with the CSO (he was to have conducted the Cherubini “Requiem” in October), the Overture in G Major, along with a performance of the Schumann Piano Concerto with soloist Mitsuko Uchida, fresh off of her all-Mozart programs as conductor and soloist last week.

Topping off the program will be the Shostakovich Fifth Symphony, long a party piece for Muti and his major contribution to the area’s ongoing eighteen-month long Soviet Arts Experience festival.

Although not open to the public, Muti is also expected to preside over the first-ever international Sir Georg Solti Conducting Competition and Apprenticeship this week, which will culminate in the February 8 announcement of the selection of a conducting apprentice to Muti, one who can hopefully step in should the Maestro need a breather. (Dennis Polkow)