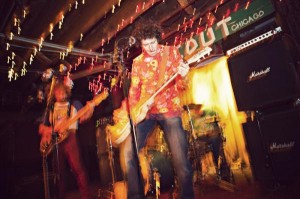 Psychedelic Chicago is at home in the music of Dark Fog. Adroitly mixing overdrive space rock and downer nineties shoegaze, Dark Fog is the bringer of big sound, as in capacious, reverberating broadly enough to fill an amphitheater of drooling sonic minions. The witchy, acid guitar noodling, though, might suggest that the Fog would’ve been right at home playing the monumentally large Woodstock, sending weeping psychedelic melt-wash caroming over the rustic hills of the Hudson Valley for miles in the dusk. Dark Fog makes the kind of music that can only herald the approach of, to use the full extent of my nerd-core knowledge, a planeswalker, that is, one of those legendary creatures of Magic: The Gathering fame who can traverse the different planes of existence like a superstring pilgrim. A tuned-in and dropped-out wet-dream, full immersion in the Fog presents with all the static charge of a dimensional rift, leaving rainbow fractal stains on the retina. And maybe it all sounds like a bad cliché of seventies spoon-bend psych, but in this case, the cliché is where language hits a dead end; you just have to be there man. (David Wicik)