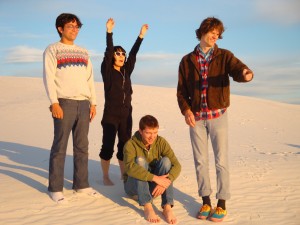 While the title of Deerhoof’s latest album, “Deerhoof Vs. Evil,” seems a little bombastic, even overreaching, after more than fifteen years of making a living selling a skewed songbook that would challenge even the coolest of cool dads to sit still for a listen, maybe they’re worthy of it. The San Francisco quartet, which combines toy-pop and prog-rock with an ear for the psychedelic, is probably most easily recognized by the affect-less trilling of Tokyo native Satomi Matsuzaki. The record definitely marks the gradual mellowing of the group’s oeuvre, and yet, for that, a more rich complexion of musical style’s at play. In the track “Secret Mobilization” alone, a beefy roadhouse-rock guitar line pairs off against a kind of motorik, cool-jazz cowbell and featherweight electric organ before running into a clean guitar chik-a-chik suggesting disco. The group gets major credit for deliberately leaking the entire album, a track at a time, via various online outlets in the run-up to its release, a gesture of confidence in an era of transparent music marketing. And while the album won’t topple any dictatorial regimes (unless we’ve greatly misjudged the sources of revolution in Egypt), there is a certain kind of evil in the blandness of mainstream indie fare which Deerhoof’s intransigent songwriting valiantly defies. (David Wicik)