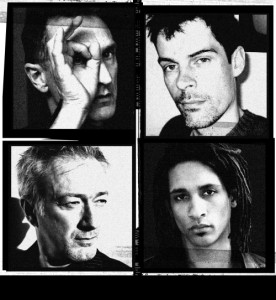 Perhaps the greatest compliment to Gang of Four’s legacy is that, at first listen, their new album, “Content,” sounds so remarkably average. With decades of up-and-coming artists assiduously trying to master the playbook put down by these post-punk originators—capped by the explosion of the 2000s which saw bands like Franz Ferdinand, Bloc Party and the Futureheads lifting Gang of Four wholesale—it’s no great surprise that Gang of Four would fail to stand out in a world created by their imitators. This sentiment is, perhaps unwittingly, alluded to on the track “Who Am I,” on which singer Jon King complains, “Who am I when everything is me?” Nevertheless, what makes Gang of Four a viable act today, other than their celebrity, is their enduring ability to say something with their songs. Famous for their caustic political sloganeering, Gang of Four have matured, and while there is still a strong political element to their music, “Content” finds the group approaching the issues of the day from the sober perspective of half a lifetime’s worth of introspection. And, after all, since it’s their own turf they’re treading, maybe it’s time for the posers to step aside and let the big boys have the stage. (David Wicik)