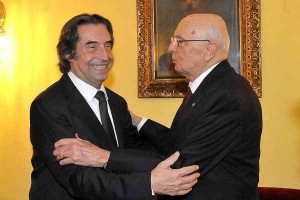 Riccardo Muti did get to town last Monday night and by Tuesday morning, was rehearsing with the CSO for the first of his eagerly anticipated winter concerts. Wednesday’s rehearsal was canceled due to the blizzard and Thursday, February 3 thus became a double-rehearsal day before that night’s scheduled concert. The reports are that after a vigorous morning of rehearsal and while Muti was leading a run-through of the Shostakovich Fifth Symphony at 12:40pm, he suddenly collapsed from the podium and with a loud thump heard by many of the players through the music, hit the wooden stage floor of Orchestra Hall.

The initial CSO reports were that Muti had fainted but had not lost consciousness, an oxymoron, and had some resulting “superficial” face cuts. Player reports were that Muti’s injuries had been far more serious and that he was bleeding when he was removed by stretcher and ambulance and taken to Northwestern Memorial Hospital. The CSO had to scramble for a replacement program and artists for the evening, and as the extent of Muti’s injuries became clear, for the rest of that week, and later, for this week, as well.

By Friday the orchestra was calling the incident a “fall” rather than a fainting spell, and revealed that Muti would undergo surgery to repair “multiple facial and jaw fractures,” which was successfully performed Monday. Alexis B. Olsson, DDS, chief of oral and maxillofacial surgery and assistant professor of clinical surgery at Northwestern Memorial Hospital and Northwestern University’s School of Medicine, performed the surgery: “During surgery, screws and plates were placed to facilitate healing of the facial fractures. The upper and lower jaw have also been temporarily fixated using wires to stabilize the lower jaw during healing,” said Dr. Olsson, who was also expected to give a Tuesday news conference at the hospital at press time. “The surgery went extremely well and I’m pleased with the outcome; I anticipate that Maestro Muti will make a full recovery.”

While waiting over the weekend for his surgery, Muti reportedly received a call from the president of Italy, Giorgio Napolitano, and wrote retiring principal bassist Joseph Guastafeste a message that was read at Guastafeste’s onstage retirement ceremony Saturday night: “I am very sorry that the accident that happened to me prevents me from being with you and your colleagues tonight to celebrate your wonderful career of so many years with the great Chicago Symphony Orchestra. As I told you the first time we met joking about your name ‘Guasta-Feste’ [which means “party buster”] tonight is me that I’m not able to make the ‘festa’ even more joyful.

“I will always remember your humanity since the first day I came back to the Chicago Symphony and maybe because I looked like a poor hungry Southern Italian, you always brought me some cakes that the nuns had baked. That was a gesture not between two southern Italians but between two musicians who could immediately communicate in the name of the great music-making that the Chicago Symphony Orchestra gives to Chicago and the world. You can be proud of your contribution to the Orchestra, to the City of Chicago and to the world of music, and remember that musicians never retire even when they disappear from the Orchestra, because their music-making and their artistic contribution is like an invisible chain that nobody can interrupt. With great affection and many greetings to the family, RM. PS Don’t forget Sicily.”

The fate of next week’s Muti-led concerts—the last of his scheduled winter residency—is still up in the air, as is the final round of the Solti Conducting Competition, which has been interrupted and its conclusion postponed. Meanwhile, this week’s revised CSO program will be led by Finnish conductor Sakari Oramo, who makes his CSO debut at these concerts, which includes Sibelius’ “Finlandia,” the Tchaikovsky Violin Concerto with soloist Vadim Repin and the Prokofiev Sixth Symphony.

Also still up in the air is the underlying cause of Muti’s collapse, though CSO president Deborah Rutter emphasized that Muti had been undergoing “a series of tests” to determine that, and that those results were expected to be released to the public.

It is a curious tightrope that the CSO has been walking, experiencing two sudden Muti illnesses within his first two stints here as music director: on the one hand, there was the attempt to be reassuring at first, sort of a “just a scratch, he’s fine” mentality, which may have been believed at the time. Reaction to that approach was such disappointment and even anger on the part of would-be concertgoers that the strategy became one of greater transparency. The first reports were vague, even saying that Muti had been taken to an “undisclosed hospital.” That evolved into involving the surgeon in the press releases and even scheduling a hospital news conference with the surgeon, raising privacy issues about how much the public has a right to know about the medical condition of a public figure.

Coming at a time when the orchestra has just launched its “Citizen Musician” initiative, these episodes serve as a potent reminder that even the most wonderful, perfection-seeking and expressive musicians—and Muti is as good as they come—are fallible human beings, first and foremost. As disappointed as we may be to not be hearing Muti’s glorious music making, we cannot be a fraction of how disappointed Muti must be to have come here in the dead of winter to make music and instead be unexplainably and unexpectedly ill, collapse, severely injure yourself and lay helpless in front of your own new orchestra—with all of the humiliation and embarrassment that goes with that—and then experience a painful and tedious public recovery with his jaw wired shut in a strange hospital room half a world away from home and family during some of the worst weather ever experienced here. (Dennis Polkow)