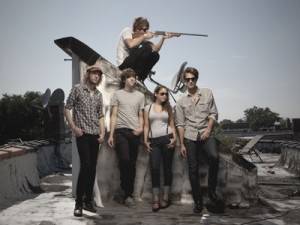 Part of the rapidly accumulating Chicago psych movement, Secret Colours come at the scattershot scene from a distinctly different angle than most. Whereas unconstrained kraut- and space-rock improvisation seems to have made itself a hallmark of the Chicago sound of late, Secret Colours front a more put-together sound, styling a mellow psychedelic vibe closer to Brian Jonestown Massacre. Citing as sources everything from The Grateful Dead to the Stone Roses to the aforementioned BJM, Secret Colours balance early garage, spaced-out blues, folktronica and latter-day Merseybeat (perhaps the reason for the Anglicized “Colours” in their name). Strangely an orchestration with such clear references manages to sound fresh in the hands of Secret Colours. Their self-titled debut album has been making the rounds in the local press, and rightly so; Secret Colours provide the answer for all those old fogies listening to their reel-to-reels in wood-paneled dens and complaining, “they don’t make music like they used to.” (David Wicik)