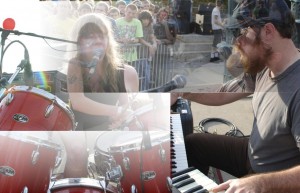 Having barely released a tape of their recordings and with a web presence that borders on the nonexistent side of minimal, Wumme (pronounced “woom”) may seem the unlikely subject of a feature profile. Nevertheless, there is plenty of reason to suspect that the Pilsenite partnership of April Camlin and Albert Schatz will be making many more headlines before long.

For one thing, Wumme’s lack of a traditional web presence—which for emerging musicians today centers around profiles on Last.fm, SoundCloud, Bandcamp and most crucially (and inexorably) on MySpace—can be explained by their refusal to participate in commercialized web media. While Wumme have their own website (wumme.net), they will not open a MySpace account on principle, since a certain portion of their own domain would always be allocated to advertisers.

So who are these communist weirdos and why should you care? Good question, and the duo’s history is one big reason you should care. Schatz played for five years in the eminent Chicago psych-pop quintet Bird Names, which made a name for itself in the mid-2000s as a group with more inventiveness than it properly knew what to do with, although such criticism seems like hedging for the normative music market. Bird Names’ bizarro-brilliance falls somewhere in between the Beatles’ Sgt. Pepper and Ween with its jangly, garage-sale percussion and polyrhythmic guitar layerings.

Camlin, on the other hand, is a self-taught drummer, ventriloquist, performer and fiber artist and carries the distinction of having been part of the Wham City art collective. For those not in the know, Wham City was formed in 2004 when a group of SUNY Purchase students decided to set up shop in the Baltimore warehouse space of the Copy Cat building. Camlin describes the group as “an amorphous electronic cloud of ideas.”

From hosting curated art shows and music festivals, to launching comedy tours and productions such as a farcical take on the Jurassic Park story, Wham City had a diverse and broad-ranging impact on the world of underground culture. Around the leadership of founding member Dan Deacon, Wham City became nearly synonymous for a time with Baltimore music.

It was during the Baltimore Round Robin, a tour organized by Deacon, that Schatz and Camlin met. Camlin joined with more than forty artists on the tour, playing at the Epiphany Church when the show came to Chicago. Schatz remembers the entire roster was staying at his two-flat apartment at the time: “people were sleeping on the roof and in the backyard… basically everywhere.” 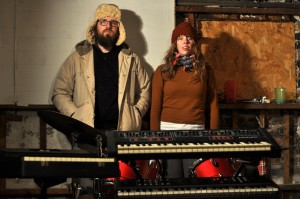 Their relationship grew as Schatz visited Baltimore several times on tour with Bird Names and Camlin began visiting Chicago to see Schatz. In 2009, Camlin moved to Chicago after having lived in Baltimore her whole life. She explains that she needed a shake-up: “It’s kind of easy when you’re living in this community of people that you all know and who are all really supportive, to kind of not work as hard as you know you could be. I feel like I wasn’t living up to my full potential and I needed to get my butt kicked and feel alienated.”

In late spring of 2010, with Bird Names having split up, Schatz was looking for a new project. He began jamming with Camlin who herself had been looking to pursue music-making in a more concentrated way for some time. Schatz says that they were both starting over, and that’s why they decided to make their group’s moniker a homophone for the word “womb.”

The spelling for “Wumme,” on the other hand, speaks more to the group’s influences. Wumme is the name of the German town where first wave kraut-rockers Faust had their own residential studio. “I always felt like that band was my spirit band. I didn’t like all of their stuff, but I liked their attitude, and the studio that they had in an old schoolhouse in Wumme, and they just lived there together for years recording and getting Virgin Records to give them tons of money,” says Schatz.

Wumme’s inspiration, however, extends far beyond the kraut-rock of Faust and Can. Speaking with Camlin and Schatz, one gets the feeling that there are few groups with the depth of knowledge of strange and occulted music cultures that Wumme brings together. While Schatz is a lifetime Beefheart fan, Camlin admires the wilder side of late seventies and early eighties London post-punk, bands like Slaphappy, The Slits, The Raincoats and Unrest, Work & Play.

Listening to what looks to be a self-illustrated demo tape, it’s easy to pick up on another alleged influence, Stereolab. Along with broad sweeping analog synth tones and motorik drum lines, there are many little percolations of rhythm bubbling up under a seemingly smooth surface. Also, Camlin’s half-heard vocal drapery picks up on Laetitia Sadier’s wistful singing in its more sustained, ambient presentation.

For Camlin and Schatz, it seems, Wumme is more about the purity of performing the music than anything else. In sync with each other, Schatz claims, “I always think that our goal is to make something that you can play and have it be a transcendent experience,” while Camlin reflects, “I think there is a zen state of being that you have to be in when you play live…it feels really good to be doing something different with each of your four limbs.”