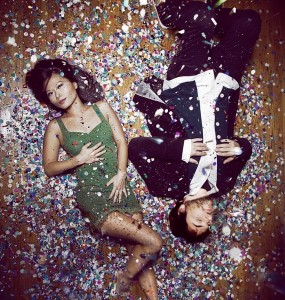 On the heels of their fifth full album, the Brooklyn shoegaze outfit bring their dreamy take on pop hooks over sonic jetwash to the Empty Bottle. “Flourescence,” released earlier this month, has the band moving towards bare-boned electronic post-punk territory, gravitating more towards Curve and My Bloody Valentine than Cocteau Twins on tracks like “Trails” and “Trance Out.” Yuki Chikudate’s soaring vocals still manage to surface above that expected cacophony of drone-noise, feedback and distortion, whether taking a distinctively retro sixties approach on “My Baby” or echoing as sonic texture on the epic “Leave the Drummer Out There.” Also wearing their influences on their cover sleeve, “Flourescence” showcases the distinctive style of classic 4AD Records to boot, with artist Vaughan Oliver supplying the look. And there, somewhere between the future and the past, eyes sometimes closed, keeping time with a finger on the keys and another shaking a maraca, Chikudate and Asobi Seksu don’t reinvent the wheel, but spin it well enough to trample over naysayers and trite, dead-genre revivalists. Hidden melodies, and surfacing beauty, textures upon sonic texture… if you like it, love it, you’re already there, and if you don’t, you already know. It’s why you never could get into the Jesus and Mary Chain or thought the first Raveonettes record sounded weird. But for the rest of us, we’ll see you there! (Duke Shin)