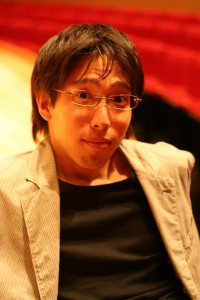 Though he was not conducting nor appearing publicly, recuperating CSO music director Riccardo Muti has had an active administrative week at Symphony Center, overseeing auditions as well as the rescheduled finals of the first-ever International Sir Georg Solti Conducting Competition and Apprenticeship. Curiously, Muti himself first came to wide attention when he won a similar competition back in 1967, the Guido Cantelli Competition for conductors in Milan.

“When I accepted the Music Directorship of the Chicago Symphony Orchestra, one of the first ideas that I had was to create an apprenticeship position for young conductors to come to Chicago and study both with me and also with some of my most experienced colleagues whom I have had the pleasure of inviting to conduct this wonderful Orchestra,” said Muti in a press statement.

“I feel it is very important to identify conductors early in their development and to encourage them to study, not only to understand deeply the structure and content of the music, but also to know what it is they want to convey when they stand in front of an orchestra and chorus and how to communicate it. I spoke to my good friend Valerie Solti and asked her permission to name this apprenticeship after her husband, Sir Georg Solti, who led the Chicago Symphony Orchestra for many years. We named the competition and apprenticeship in his honor not only because of the great leadership he gave to this Orchestra, but also because he shared my concern that young people, when studying the craft of conducting, should develop the ability to work with singers and instrumentalists from the piano. I believe this study is crucial in the development of a complete musician, one who is able to stand in front of an orchestra with natural authority.”

This first year’s Solti Competition attracted applications from 225 young conductors from forty different countries on five continents. The semifinal round of the competition was held from February 4-6 and proceeded as scheduled without Muti, who was hospitalized and had jaw surgery and a pacemaker put in following a collapse during a CSO rehearsal on February 3.

Ten semifinalists coached singers from the piano and rehearsed and led the Civic Orchestra of Chicago and were evaluated by a jury comprised of the Juilliard School’s director of conducting & orchestral studies James DePreist, bass-baritone Samuel Ramey and Detroit Symphony Orchestra music director Leonard Slatkin, whose orchestra remains out on strike and who also stepped in for Muti here on a few hours’ notice after Muti’s collapse. The semifinal panel also included CSO musicians including concertmaster Robert Chen, J. Lawrie Bloom (clarinet and bass clarinet), cellist Katinka Kleijn and trombonist Michael Mulcahy. From those evaluations, four finalists were chosen to compete for the apprenticeship: David Danzmayr (age 31, Austria), Sean Kubota (age 29, Japan), Lio Kuokman (age 29, Portugal) and Ryan McAdams (age 28, United States). The finals were held last Saturday, February 19 and Muti did serve on the final jury that made the final decision, which also included Ramey, Chen, Bloom, Kleijn and Mulcahy. The four finalists were each asked to coach singers from the piano and rehearse and lead the Civic Orchestra of Chicago.

“It is truly gratifying to see this initiative come to fruition with the appointment of the first Sir Georg Solti Apprentice, Sean Kubota,” Muti concluded in his statement. Kubota was named the winner of the competition late Saturday afternoon and receives a two-season apprenticeship which includes at least four weeks a year in Chicago studying with Muti and CSO conductor emeritus Pierre Boulez, along with key CSO guest conductors. Kubota also receives a $20,000 cash award each of the two years as well as travel and lodging expenses, which help to support apprenticeship activities. A native of Tokyo, Japan, Shoichi “Sean” Kubota, 29, has appeared as a conductor with the Melbourne Symphony Orchestra, the Detroit Civic Symphony, the Philadelphia Youth Orchestra, the Sofia Symphony Orchestra and the Orchestra della Toscana. His conducting teachers have included Hugh Wolff, Marin Alsop, Leonard Slatkin, David Zinman and Kurt Masur. During the summers from 2004-7, Kubota was invited to the Accademia Musicale Chigiana in Italy where he worked with Gianluigi Gelmetti and received the Emma Contestable Fellowship. In 2008, Kubota made several appearances as a fellow conductor at the American Academy of Conducting at Aspen. Kubota received a Master’s of Music in orchestral conducting in 2005 from the Juilliard School and later continued his studies and received a professional study diploma from Mannes College of Music. He is also a 2008-9 season recipient of the Japanese Government Artist Fund.

Although Muti’s next scheduled public appearances are performances of Verdi’s “Nabucco” with Opera di Roma in March and his next scheduled Chicago public performances—including his first Carnegie Hall concerts with the CSO as music director—are in April, it was not known at press time how much longer he would remain in Chicago to recuperate. At the very least, it was expected that the wires holding his jaw together would remain in place for three weeks after his February 7 surgery and would be removed by February 28.

Meanwhile, this week’s scheduled CSO concerts see the return of popular Finnish composer and conductor Esa-Pekka Salonen leading the CSO in the much-anticipated second-ever performances of his Violin Concerto, which received its world premiere in April 2009 with the Los Angeles Philharmonic. Also on the program are Debussy’s “Prelude to the Afternoon of a Faun” and the Sibelius Second Symphony, composers and works with which Salonen has always enjoyed a special affinity. (Dennis Polkow)