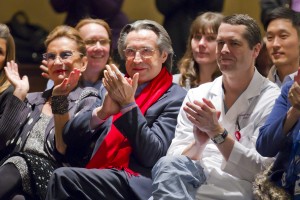 Chicago Symphony Orchestra musicians performed for doctors, staff and patients at Northwestern Memorial Hospital in gratitude for the care that their music director Riccardo Muti received there last month.

Last Tuesday, February 22, violinists Nathan Cole and Akiko Tarumoto, violist Max Raimi and cellist Kenneth Olsen performed works by Mozart and Haydn and on Wednesday, February 23, Christopher Martin and Tage Larsen (trumpets), David Griffin (horn), Charles Vernon (trombone) and Gene Pokorny (tuba), performed a program including works by Bach and Holst. The string program was performed twice, once for the doctors and staff, and then again for patients through the hospital’s closed-circuit television network which is available in all of the patients’ rooms. Nearly five hundred individuals attended the concerts over the two days, in addition to the broadcast.

Muti himself made an unannounced appearance and thanked the doctors who worked on him, including Drs. Alexis B. Olsson, Bradley P. Knight and Donald Lloyd-Jones along with Northwestern Memorial HealthCare president and CEO Dean M. Harrison, who was also in attendance. Muti did not address the audience, but thanked the musicians for their gesture of appreciation on his behalf.

The CSO released photographs from these events—including the first of Muti since his surgery—though appearances are deceiving: Muti’s jaw is still wired shut, but the attachments are all on the inside of his mouth. At the time of the photos, we are told, the wires had been replaced with elastic for greater flexibility but the Maestro is still unable to eat solid food.

Muti also met with guest conductor Esa-Pekka Salonen, who conducted a memorable program last week that included the Chicago premiere of his eclectic Violin Concerto last week with soloist Leila Josefowicz along with music of Debussy and Sibelius. “I first met him in 1984,” says Salonen of Muti, “when he was chief conductor of the Philharmonia and I was just starting to work with the orchestra so the management wanted to introduce me to him.” Salonen is now the principal conductor and artistic advisor of the Philharmonia Orchestra, so “there is sort of a full-circle feeling. When I saw him the other day, it was a very warm and familiar meeting. I’m a big fan of his, and always have been: he is one of the great conductors.”

Salonen was also scheduled to conduct a Civic Orchestra concert on Monday night (February 28) and his CSO programs this week include the Overture to Wagner’s “Die Meistersinger von Nürnberg” and the Bruckner Seventh Symphony, replacing the previously announced Mahler Seventh Symphony, which was performed in October by Pierre Boulez and the CSO when Muti was initially indisposed. 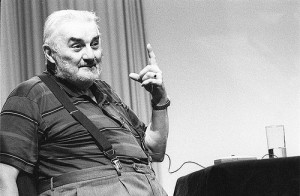 But the real curiosity of this week’s program is Franco Donatoni’s “Esa (in cauda V),” a piece commissioned by Salonen and the Los Angeles Philharmonic from his onetime composition teacher but which the composer died before attending to, or so Salonen thought. “I know he was in the hospital from complications related to diabetes,” says Salonen, “and the next thing I knew, he had died. I couldn’t make it to the funeral in Italy and I had no expectations that we would have a piece in any form. But one day a few months later, there was a score in the mail along with a note from his publishers that Maestro Donatoni had dictated this piece on his deathbed and his students were taking dictation.”

Salonen was shocked enough by that, but even more that the piece itself had been given his own name, “Esa.” “He liked to link phonetically to short words with vowels, and ‘Esa’ is short with two vowels, so it works. When I started to study the score, this was very much not a dying man’s piece, whatever that would be. He was not into writing a Requiem for himself. It was jolly, funny, very energetic with good humor. It felt almost like a greeting from the other side: ‘It’s okay. Carry on. Life is good as long as it is, and then it ends, and that’s good, too.’ It was not some grand farewell, but almost a whimsical and nostalgic ‘ciao,’ as if I am not really leaving the world. It was almost like the little guy who runs across the stage and waves at the end of ‘Der Rosenkavalier’.” (Dennis Polkow)