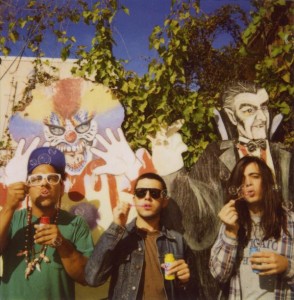 Fresh off of their stint on Carnival Cruise’s Bruise Cruise festival, the world’s first floating indie music festival, the Jacuzzi Boys are once again spreading their swampy garage rock on the mainland. Hailing from Miami, a town better known for its cosmetic sex appeal and overly solicitous cocaine vendors than for its live music scene, the Jacuzzi Boys give the city reason to hope. Breaking down the music of their rock progenitors with ease, the Jacuzzi Boys’ lead vocalist Gabriel Alcala channels Lou Reed and Mick Jagger being, in turns, leonine and faded. Similarly, what the band self-identifies as “tropical rock ‘n’ roll,” or in their own local nomenclature, “little-Haiti rock ‘n’ roll,” is a slow-paced chug meeting halfway between blues and psychedelic. The track, “Komi Caricoles,” on Jacuzzi Boys’ EP “No Seasons,” features head-rush filter effects, dirge-like vocals, and a woozy pace that oozes a kind of voodoo weirdness unknown to West Coast garage. Whatever they’re doing, the Jacuzzi Boys managed to catch Miami emigré Iggy Pop’s attention, who was spotted cheering in the front row at one of their shows. If it’s good enough for Iggy… (David Wicik)