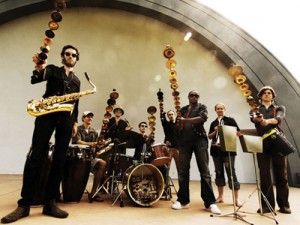 If you have never heard the music of NOMO, consider this your opportunity for musical education. Rising out of the well-trodden depths of Afrobeat diaspora in the mid-aughts, the Ann Arbor, Michigan ensemble, fronted by Elliot Bergman, styled its own unique hybrid form with two releases late in the decade, 2008’s “Ghost Rock” and 2009’s “Invisible Cities.” NOMO’s original derivation includes reliance on softly metallic vibraphones as well as standard kit in percussion, funk horn and sax parts and subtle electronic manipulation. Perhaps the more avant-garde of the two, “Ghost Rock” is not afraid to employ dissonance to build anxiety, as on opener “Brainwave,” perhaps a more sedate and drawn-out analogue to the genre-spawning crescendo’s of Radiohead’s “The National Anthem.” Overall it is NOMO’s boldness in synthesis that marks them out, somehow managing to combine Fela Kuti and Tortoise without making it sound like cats fighting in a bag. (David Wicik)