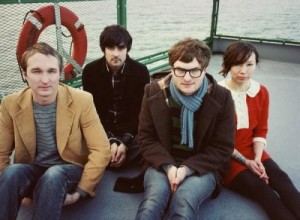 Seattle musician Michael Benjamin Lerner rolls into Chicago this week, bringing with him his onetime one-man act, Telekinesis. Lerner was quick off the mark, signing to the epoch-making Merge Records in 2009, just a year after starting Telekinesis. His debut album, “Telekinesis!,” is a neat indie-pop artifact which no doubt benefits greatly from the expert production of Death Cab For Cutie front man Chris Walla. A sweater-and-glasses-wearing song-styler, Lerner may be the mild-mannered Clark Kent of the indie-verse, but his ability to write infectious compositions that avoid being trite belies his pop superpowers. While Telekinesis probably won’t be the next big thing, and in fact can come off as a rehash of the last big thing, its clean, no-frills writing deserves more than cranky critical parsing. Treating on such banner themes of youth as battered hearts, a lover’s smile remembered in juxtaposition with sunny coasts, and adrenaline-amped dreams of far-off wonderlands, Telekinesis makes it easy for the listener to buy in. (David Wicik)