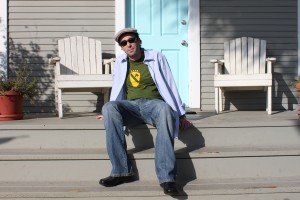 Los Angeles-based musician Ken Elkinson (kenelkinson.com) has a three-CD solution for those of us caught in the hostility of blaring horns and dangerous cutoffs, or perhaps an hour on the rackety El. Traditionally a pianist, Elkinson enveloped himself in the multifarious world of synthesizers for this project, creating a box set appropriately entitled “Music for Commuting” that ebbs and flows with the days of the week. Empathizing with Chicago’s recognized commuting pains, he mentions shock and awe of L.A.’s drivers that, literally, drove him to compose music that could ameliorate the horrors of the highway: “People are reading books when they’re not even stuck in traffic, shaving with electric razors, texting. There’s constant traffic and construction, unexplained stopping. [Traffic] slows for ten minutes and I’m thinking, ‘There better be blood!’ I get so angry and I try not to.”

The box set’s three CDs correlate with the work week, starting with Monday/Tuesday (a generally mellow mix of soothing synths that gradually grow over the course of the CD’s twenty tracks), Wednesday/Thursday (a combination of that midweek darkness and hopeful flickers of breaching the halfway point), and Friday/Beyond (a spacey spout of futuristic blurbs and weekend amusement). The cover art, by Danish artist Ib Geertsen, complement Elkinson’s theme with titles including “Space,” “Movement” and “Form within form.” Geertsen helped propel the concrete art movement in Denmark, a subset of abstractionism that honored structure and form over subject and motif. 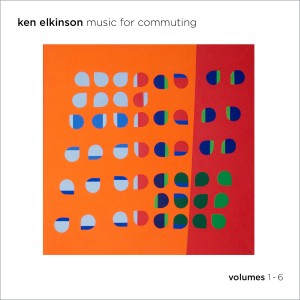 Composed with the commuter in mind, Elkinson concedes that people’s sentiments throughout the week do not all follow the same path. He was aiming for the progression of the songs to follow that of a person, admitting that sometimes he can’t wait for Monday: “My job [can be] more relaxing than my four-year-old twins!”

Despite layering anywhere from three to twenty instrumental sounds on one song, Elkinson played every note on the three-and-a-half hours of electronic music—”splicing felt like cheating”—and approached each song with an initial riff, then a primary melody, most of which he did not compose before sitting down to record. “As a solo pianist, every chord change has to be interesting. It can’t be trite and predictable. You try to make it as unpredictable as possible. For this it was totally the opposite: whatever came out, came out.”

From an initial pool of more than 160 song possibilities, the tracks that didn’t make the final cut “eliminated themselves,” Elkinson says. The sixty-track box set (ten songs for each day of the week and ten for the weekend) form an apparent cohesiveness of structured sound and freeform improvisation. The result is a palliative compilation that might suppress the urge to rip out your hair on I-94, or maybe provide background resonance to contemplate your day in peace in the minutes otherwise lost bumper-to-bumper. (Kristine Sherred)