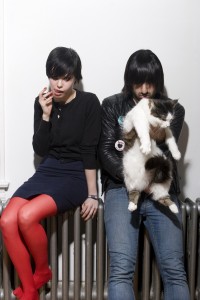 Ever since Ethan Kath secretly recorded fellow Torontan and punk vocalist Alice Glass on a soundcheck, the partnership has been setting the pace for electro-pop. While Crystal Castles is allegedly a reference to He-Man’s estranged twin sister She-Ra, Kath’s electronic engineering sounds a lot more like the 1983 Atari game of the same name. 8-bit sounds bubble up everywhere around house beats and Glass’ processed vocal antagonism on their debut self-titled LP (circa 2008). Breakout single “Alice Practice” (which features those original stolen vocals) sounds like a crack addict arguing with a malfunctioning arcade game. Last summer saw the release of the long-awaited sophomore album from CC (also self-titled), and a change from video-game themes to haunted compositions, building on layers of spectral reverb, pitch-shifted laudanum vocals, and ominous bass-synth runners. The exemplary track “Violent Dreams” imagines a kind of gothic possession story with dark clouds of bass undergirding stalking organ notes and chopped intonations including nearly subliminal ghost moans. Crystal Castles’ major conceit may be how little Glass’ lyrics contribute to their songs overall impact. More of a visual foil to Kath’s dark electronic wizardry, she nevertheless makes the live show worth seeing. While Kath hides behind his bangs and a cul-de-sac of boards and processors, Glass is out front hot-footing like a Native American in the midst of mescaline reveries. Notice to those in the crowd who manage to get up front, be prepared to play catch because this lady likes to stage-dive her own shows. (David Wicik)