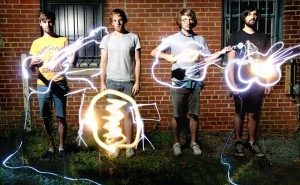 A credit to Chicago music culture and the Columbia College scene where they first met, Maps & Atlases make intricate music that plays off pop-folk songwriting while incorporating highly technical, progressive orchestration. Occasionally referenced as “math-rock” for their angular melodies and rhythmic density, their latest album, 2010’s “Perch Patchwork,” shows Maps & Atlases moving away from their rigorous Don Caballero leanings, into the hooky realms of pop. “Living Decorations” is a track worthy of the Dirty Projectors, complete with bouncy, world-beat strumming and eclectic percussion via pace-setting handclaps, wood-block, xylophone and what sounds like a djemba, not to mention the harmonic cap of Dave Davison’s free-ranging baritone voice. That track, in fact, is a perfect example of Maps & Atlases’ ability to restrain technical superfluity in service of sharp songwriting. Saxophone and a calypso beat give “Pigeon” a distinctively tropical feel, reminding one of a more nimble Vampire Weekend. The full flower of Maps & Atlases’ imagination is on display in “Perch Patchwork,” a lushly built album which ends with a title track that elegantly waltzes between art-rock and chamber folk, as ambitious and polished as Sufjan Stevens at his best. (David Wicik)