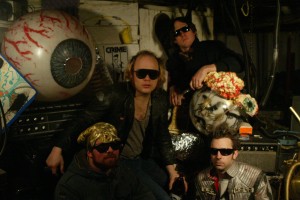 “I got glitter all over some guy’s quesadilla in Columbus one time,” Timmy Lampinen, better known as Timmy Vulgar, says over the phone. “We’ve got a reputation.” Lampinen and Human Eye, one of the flailing punk outfits he fronts, understands how important the performative aspect of any band’s live show actually is.

Going back to Victorian theater or its American extension in minstrelsy and vaudeville, there’s a tradition in entertainment of striving to please audiences in a wealth of ways all at once. Sometimes props are necessitated.  Seventies glam rock and punk took performative gestures associated with playing music to an even more bombastic place. The body became an object to exploit for entertainment value.

“Iggy Pop used to cut himself, G.G. Allin shit on stage,” Lampinen continues. “It’s theatrics, just some kind of memorable thing. I don’t wanna be like every other band, standing there wearing flannel. I just wanna put on a good show, but not a shocking one necessarily.” A Human Eye gig might include some homemade masks or other costumes or half-frozen seafood alongside its dystopian robot-punk.

Lampinen and Human Eye aren’t set to inculcate Hollywood with its collective weirdness, but an earlier band he helmed found itself garnering a bit of television time. Clone Defects, a turn-of-the-millennia punk band, had its song “Low Fashion Lovers” rented out to Mitsubishi for a car commercial. “If it wasn’t punk rock, I don’t give a fuck,” Lampinen says. “I made some money and paid some bills.” Unfortunately, after dropping that loot to fix his guitar, snag a few DVDs and videogames, someone robbed his house.

With that bit of car-company sponsorship dried up, Lampinen persisted, issuing a wealth of singles and albums through Sacred Bones and the better-established In the Red Records. Along the way, though, he found out about Detroit’s Kresge Artist Fellowships. Lampinen applied under the Performing Arts category and pulled in twenty-five thousand dollars. Most of the money’s been spent already, but there haven’t been any robberies. For the most part, that cash windfall was invested into various projects: Human Eye has a new van to tour in and spent time in a proper recording studio.

Despite his occasional run-ins with admen, Lampinen continues to rail against what he perceives to be American culture at large. The first Human Eye long-player, an eponymous effort from 2005, counts a track called “Kill Pop Culture.” Beginning with waves of synthesizer and a quickstep drum beat, Lampinen’s snot-nosed delivery chastises the music industry and hip-hop specifically. “If you’re gonna be famous, like Kanye West, and have all these people listening to you,” he starts, “say something… It makes me sick.”

Across his substantial output, going back more than a decade, Lampinen’s maintained a persistence of vision allowing for an aural through line to be drawn from one project to the next. The Clone Defects don’t sound like Human Eye or Timmy’s Organism, another band Lampinen founded. Similarities trump differences, though. It’s still difficult for him to go back and listen to those earliest songs. “You’re cursed in that, you can’t hear your own music like fans do,” Lampinen laments. “It’d be cool if you could. Maybe you can take some weird drugs or smoke weed, or something.” Until he figures out the key to that problem, Lampinen’s endless recording and touring projects don’t seem to be in short supply. A few releases are in the works, and he doesn’t voice any ethical dilemma regarding licensing more music to the automotive industry. “My dad sold cars when I was a kid, so I just look at it like I’m using rock ‘n’ roll to sell cars.” He’s from Detroit, after all.