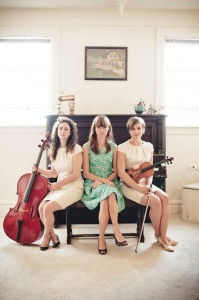 Chicago’s Singing in the Abbey effectively balances smart, moody chamber pop with trained classical-music instincts. On “Wake Up, Sardis!”—the quartet’s debut full-length officially released in early 2010—leader Annie Higgins drives the band’s gothic sound forward with her haunting, often mesmerizing, vocals and graceful piano playing. (The exquisite string accompaniments help the cause as well.) For tonight’s show at PianoForte’s Studio 825, the band plans a mix of both original compositions and classical selections, including, according to Higgins, Cole Porter’s “Night and Day.” Live, Singing in the Abbey makes complex musical pieces seem almost breezy—it’s a soundtrack to a fairy tale, but one that lives in the shadows. “We’re excited to play in a Chicago building that has so much character, after a very long winter,” Higgins says. Recently, the band posted four new demos to music site Bandcamp.com, which are available for download. (They’re currently working on a follow-up full-length to “Sardis.”) This should be a good show to take in as winter eases its grip. (Tom Lynch)