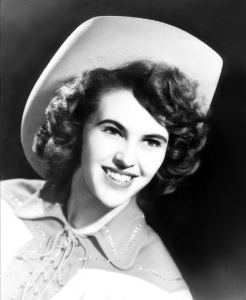 Rock ‘n’ roll wasn’t invented in a vacuum. Certainly, blues and revved-up R&B had more than a bit to do with one of the most important American innovations. But as much as Ike Turner and Jimmy Reed came to bear on rock ‘n’ roll, country music pioneer Jimmie Rodgers also looms large over the genre. It’s for that reason Wanda Jackson closes “The Party Ain’t Over,” her latest long player, with “Blue Yodel #6,” a Rodgers’ standard.

The song’s nothing more than a lament, its narrator recounting the loss of a lover. Comprising the song’s few stanzas are the daybreak departure, a wish for destruction since the pain’s overwhelming and finally a desire to split town and forget what’s happened. Initially recorded before the Depression, Rodgers yodeled down sorrow and unwittingly helped codify the artful language of rock ‘n’ roll. A few decades on, when Jackson began performing, cherry picking the ripest compositions for inclusion in her own songbook didn’t present difficult choices. Sourcing similar material to a then-unknown Elvis Presley, who Jackson toured with during the mid-fifties, she flitted between country, rockabilly and nascent rock. Charting in any given genre only lasted a few years and by the sixties Jackson turned to more stilted fare and eventually found her faith a decade later.

Recent resurgences by the likes of Jackson, Ramblin’ Jack Elliot and even Johnny Cash just prior to his death show how people remain interested in Americana’s past. “The Party Ain’t Over,” which includes more than just a couple songs Jackson recorded during her heyday, updates the form she helped found with help from Jack White and a tossed-off assemblage of players associated with the onetime White Stripe. It’s not quite a revival act. But if one considers Jackson’s resurrection in such terms, her performances might still out-stripe other senior citizens touring the nation’s highway system. (Dave Cantor)