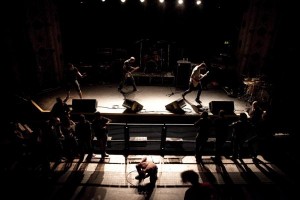 Keeping alive Chicago’s vibrant hardcore tradition, Thieves, hailing from the Northwest suburbs, played their first show as a unit on June 6, 2006. That’s 6/6/06. How appropriate, since they use a pack of wolves as a band logo.

“Chicago is a landmark city for aggressive music, and has been for a long time,” says guitarist Bryan Gonzalez. “We feel incredibly lucky to be considered a part of what’s going on.” This last year has brought them to venues ranging from the Metro to rental halls and basements. “Chicago venues of all sizes have been very supportive and accepting of hardcore in general, whether it is a massive festival or a sparsely attended weeknight show,” says Gonzalez. “We consider ourselves very fortunate to be welcomed as we have.”

Musically, Thieves mix grind-core beats, hardcore breakdowns and metal guitar riffs akin to a muddle of Pelican, DRI and 7 Seconds. They have recorded for an upcoming split record due out later this month and two future records slated for later this year. The songs are structurally stylistic. Long driving instrumental guitar leads accented by a tight rhythmic cadence of bass and drums create the intro. This leads the way for a song that is a short complex burst like a firework thrown into a garbage can.

To support these releases, the band takes gigs within arms reach of the Midwest, from Nashville to Detroit. “We have had nothing but incredible experiences while we have traveled,” Gonzalez says. “We feel that truly speaks to the power of hardcore and the understanding throughout its community.”

Thieves’ live shows end in a sweaty bloody aftermath, and that’s just the band. Gonzalez says,”The music we create together is reason enough to perform with passion.” (John Wawrzaszek)