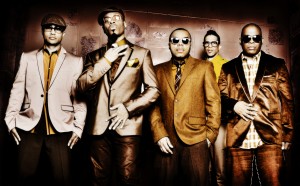 In the three decades since their inception in Saint Paul, Minnesota, Mint Condition has established itself as an extremely eclectic R&B band that can comfortably cross over into other musical styles, including jazz, funk, Latin and hip-hop while still having a signature sound, mostly courtesy of vocalist (and studio drummer) Stokley Williams.

When not on the road with Prince, the band has been steadily working and making records—they went independently for a few years, but have recently signed with Shanachie records, which is releasing their new CD “7” on April 5. The disc features the lead single “Caught My Eye,” a romantic ballad with a great backdrop from Williams, guitarist Homer O’Dell, bassist Ricky Kinchen, and also, “Not My Daddy,” a collaboration with vocalist Kelly Price that is currently making its way through the charts.

Also notable is the opening track “Can’t Get Away,” a hummable tune with a fantastic guitar solo from O’Dell, who seems to draw inspiration from rock guitarists such as Joe Perry and Eddie Van Halen. The tune goes without interruption into “I Want It,” a rhythmically rich song that seems destined for the dance floor—or to move the audience when played live. (Ernest Barteldes)