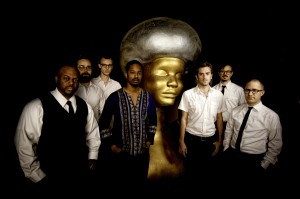 Words like authentic and gritty get thrown around in just about everything written on Black Joe Lewis and the Honeybears. Sure, Lewis worked at a pawn shop and taught himself how to play guitar while gigging around Austin, Texas. His music certainly references recordings dating back to the middle of the twentieth century, mixing in as much soul and funk as he does Electric Flag and handfuls of big-band blues groups. Releasing “Scandalous” through the Lost Highway imprint isn’t set to distance the performer and his band from the onset of Stax euphoria, but it does present a band stepping towards the realization of a unique voice.

2009’s “Tell ‘Em What Your Name Is!” introduced Lewis and his ensemble to a national audience. With its danceable back beat, efforts like “I’m Broke,” owing as much to Isaac Hayes as R.L. Burnside, present an ample band, playing predictable tunes. The expected isn’t always a bad thing and Lewis gives us all a shot of gutsy hollering, perhaps best avoided by feminists. “Big Booty Woman” can’t please everyone.

With this latest disc, the band allows for a wider interpretation of its source material even as “Scandalous” remains indebted to blues and soul. Blues means more than just rave-ups. “Messin’” won’t be confused with archival recordings, but Lewis uses an acoustic guitar to focus his group’s Texas stomp. His shouting voice is absent, but as the album’s shortest track, the effort still conveys the band’s intent: music unsullied by current concerns.

Saving Lewis and the Honeybears from being relegated to dumb party music, though, are a few songs touching on the country’s various military engagements, something becoming more and more unavoidable. As vital and current as the ensemble sounds on “Scandalous,” its live shows could prove just as raucous. (Dave Cantor)