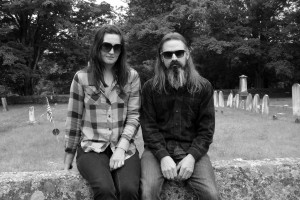 For a while, it was confusing why Ripley Johnson put Wooden Shjips on hold and focused on Moon Duo. The latter group’s first efforts weren’t far removed from the Shjips’ reliance on tripped-out rock tropes and dismissal of traditional song structure, embracing squalid improvisations doused in echo. Eventually, the duo—Johnson and Sanae Yamada—emerged as a unit unto itself. “Mazes,” the group’s recently released sophomore effort, points towards the pair’s own aural bent.

Willful or not, efforts like the album’s title track tie the combo into a pervasive beach-band thing. “Mazes,” though, outstrips most of those youngsters’ efforts by dint of its repetitive guitar phasing and kosmische back beat. Johnson’s singing even reveals a bit of emotion and moves away from the monotone obscurity of Wooden Shjips’ washed-out vocal cuts. Moon Duo’s psych now wraps around pop song-craft.

In keeping with Johnson’s adherence to minimalism—get a look at the album’s cover—even the slightest sonic alteration makes for torrential change as “Scars” points out. The middle portion of the track, all guitar solo and keys, openly references German keyboardist Klaus Schulze, but shoves the ambiance into a rock ‘n’ roll framework. Luckily, Moon Duo doesn’t come off like an eighties revival group.

Emerging with a more fully formed concept of what the band is can’t change the pair’s live performances. There’s always been a connection to what made sixties experimental rock bands so engaging. Johnson doesn’t sound prepared to spurn that influence, as his guitar work on “Run Around” so aptly points out. Bookending the aggrandizing feature with at least a few recognizable couplets should enable Moon Duo to find a wider audience even as it continues to pander to its early, stoned fan base. (Dave Cantor)