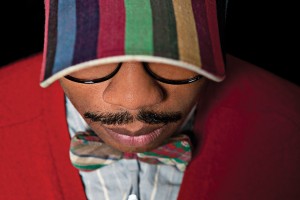 Momentarily reuniting Anti-Pop Consortium for 2009’s “Fluorescent Black” didn’t pan out too well. After garnering acclaim as the underground’s most unique and best-blended rap and electronic act during the first years of the millennium, Anti-Pop sputtered out, its three members pursuing solo recording opportunities. Eventually, all involved realized they’d been a singular act among countless crews attempting to move a staid genre forward. Anti-Pop wasn’t ignored during its initial run, but the group’s catalog, which even included collaborations with avant-jazzbos, hasn’t been addressed in the same way output from El-P and the Def Jux troop was. Beans, the most prolific and consistent out of his Consortium, returns with a new long-player, finally engaging with Oakland’s Anticon imprint.

“End It All” sports a number of reasonably high-profile guest spots. Surprisingly, it’s not the Tunde Adebimpe or Nobody feature that wind up being highlights here. While those performers complement Beans to a certain extent, each gets in the way just as frequently. Sam Fog, of Interpol fame, contributes a deadly serious beat on “Electric Bitch,” sounding as ominous as theme music from the opening of any Batman film. Musically, the production allows Beans to unleash verses sounding like they’d be a page long if written out, touching on doing nightlife in the big city. What makes the song successful is the composition functioning just as surely when Beans isn’t in the middle of mystifying listeners. Preceding that effort, “Electric Eliminator,” musical accompaniment by Bumps, finds the MC dropping names like Mark David Chapman and Blacula in about two minutes. Regardless of how many rappers would even think to mention that first figure, the song’s barren percussion allows ample space for Beans to wind serpentine lines around unexpected corners before the beat peters out. He doesn’t sport a red half-mohawk anymore, but it doesn’t sound as if he needs it. (Dave Cantor)