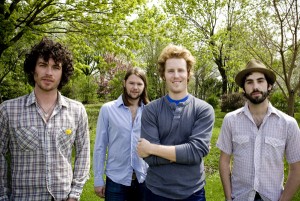 Ever the rock ‘n’ roll rebel, Ha Ha Tonka’s Brian Roberts defies stringent traffic laws by chatting on his cell phone without a hands-free device while chugging down Interstate 40 through Texas en route to the annual South By Southwest Music Festival. He’s not, however, so daring that he doesn’t fling the phone down mid-sentence at the first sighting of a police officer.

“Dodged another bullet,” Roberts says sheepishly, returning to the conversation like a kid who just pulled off a cookie-jar heist. “We usually get parking tickets. I don’t know that we’ve ever gotten a speeding ticket. We’ve been pretty lucky.”

When not on chauffeur detail, Roberts fronts the quartet of childhood friends known for their seamless integration of down-home Americana and fiery bursts of amplified six-string glory, not to mention pristine four-part harmonies. Named after a Missouri state park not too far from where the members spent their formative years, Ha Ha Tonka readies for the April release of its third record, “Death of a Decade,” on Bloodshot.

“It sounds like Alabama meets Arcade Fire,” Roberts explains when asked to describe the overall feeling of the record. “Maybe that sounds like we’re just trying to be funny, but I think the Alabama/Arcade Fire reference hopefully holds some truth to it.”

If the country stalwarts and the indie-rock saviors seem like strange bedfellows, they are, but somehow Ha Ha Tonka manages to dispel the worst qualities of both acts (Alabama’s cheese factor and Arcade Fire’s inaccessibility).

Partially recorded in an old barn, “Death of a Decade” retains the rustic sheen of days gone by while employing a heightened sense of arena bombast missing from previous efforts “Buckle in the Bible Belt” and “Novel Sounds of the Nouveau South.” Making good on the band’s initial concept of “merging the authentic with the synthetic,” lead single “Usual Suspects” courts the mandolin like a smitten teenage boy while the album’s strongest track, “Made Example Of” burns intently on a groove straight out of the eighties, albeit with a requisite jangle. “Hide It Well” goes against the grain for a pared-down, mournful treatise on feigning apathy.

The moody title track (another “fallen victim to our love of alliterative titles”) encompasses this merger of two distinct styles in addition to making a blanket statement about society’s pattern of building up larger-than-life public figures only to tear them down.

“That song in particular…tries to hit upon the theme, like with each successive generation we have usually a pop icon or a political figure [meet] an untimely demise. John F. Kennedy and Martin Luther King, Jr. in the sixties, Elvis in the seventies, I don’t know who in the eighties, but Kurt Cobain in the nineties or Michael Jackson in the last decade,” Roberts lists. “We really wanted to try to discuss what that figure’s passing means. The song isn’t about Michael Jackson, but he’s a good example of—he’s a place marker in time—and I guess trying to look back while looking forward.” (Janine Schaults)