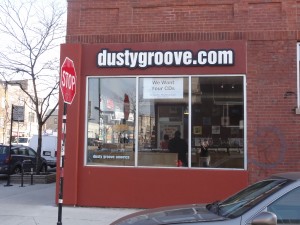 Dusty Groove America’s conception was an accident, but that’s not putting a damper on their fifteenth-birthday celebration. “The whole business really came about almost as a mistake,” says owner and “fanatical” record collector Rick Wojcik, who started the store as an online-only outlet in 1996 as a way to sell some of the surplus vinyl he had been collecting from around the country.

While the music industry as a whole tanked, demand at Dusty Groove kept growing, and Wojcik decided to open a physical store by appointment only, eventually opening the store to the public seven days a week. Now they’re celebrating their success with free refreshments, games and prizes.

Saturday, the first fifty people through the door will receive free CDs, and special-release titles will be available for limited purchase in-store on RSD only. This year, there will also be a magician performing starting at 1pm as well as a performance by jazz musician Phil Cohran and his band the Artistic Heritage Ensemble. “There’s really something for everybody, as far as serious record collectors, or casual music fans,” says the store’s operations manager, Benjamin Balcom. (Shaunacy Ferro)