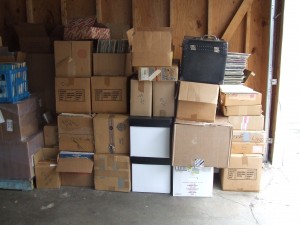 Bucket O Blood will be hosting live performances of folk and punk music.

Dave’s Records has an in-store performance by I Was Totally Destroying It at 4pm. Lots of freebies and giveaways. All used singles will be 50-percent off, and all 78s $1.

Gramaphone will have performers starting at 11am with Kevin Cunningham, DJ Demchuck at noon, Carla Starla at 1pm, DJ Limbs at 2pm, Ron Trent at 3pm, Nathan Larsen and Samone Roberts at 4pm, NewLife at 5pm, Justin Long at 6pm, Zebo at 7:30pm, and Andrew Emil at 8:30pm. Afterparty at Subterranean’s (2011 West North) monthly hip-hop, house and juke party “The Grind” from 9pm to 3am.

Half off all used merchandise at Groovin High.

I Know Everything will play on 53rd Street outside of Hyde Park Records.

Jazz Record Mart will have in-store performances by Josh Berman and Jason Adiesewicz.


Laurie’s Planet of Sound is getting started early with an in-store performance by Mike Watt at 6pm on Friday. Saturday, they’ll have Candy Golde at 1pm, Vee Dee at 5pm, and Population at 8pm, and a special DJ lineup throughout the day. Exclusive split release with BLVD Records of a limited-edition (200 red copies) Vee Dee single available only at Laurie’s on RSD. 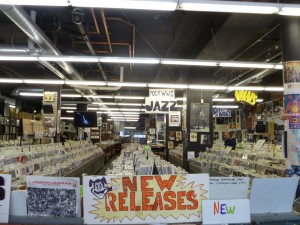 Frankie Knuckles will be at The Music Experience signing copies of his CD Motivation Too, 2pm-4pm.

Permanent Records is getting a head start and opening at midnight. In-store performance by Bad Drugs.

Saki is featuring in-store performances by Distraction at 1pm, Bob Dey’s Tank Engine Man at 2pm, Chaperone at 3pm, The 1900s at 4pm, Rabid Rabbit at 5pm, In Tall Buildings at 6pm, and This is Cinema at 7pm. Afterparty at The Burlington with special guests including Rabble Rabble, The Runnies and CHIRP.

2nd Hand Tunes is opening Friday at midnight and giving out free t-shirts with any purchase.

Val’s halla will feature Jim Haptonstahl and Friends at 1pm. All items (except RSD releases) will be on sale.

Vintage Vinyl Records will have an in-store performance by Tim Larson & the Owner Operators at noon.

Chicago label Alligator Records will be releasing a two-disc compilation of blues and rock with thirty-eight tracks from artists including Lil’ Ed & The Blues Imperials, Buddy Guy and Robert Cray.

Chicago label Thrill Jockey is releasing three splits: one with electronic group Oval and metal band Liturgy (400 copies), another with Phil Manley and space-rockers Earthless and a third with bluesman Charlie Parr and The Black Twig Pickers.

For the complete list of RSD releases, go to recordstoreday.com.