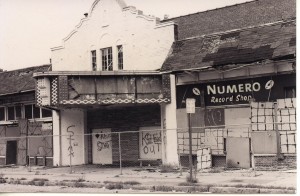 Numero Group is taking Record Store Day literally. The famed archival label plans to install its very own record store in a Milwaukee Avenue storefront—just for the day.

It’s an ambitious undertaking, but that doesn’t daunt Numero’s co-founder Ken Shipley. “We’re kind of a go-big-or-go-home group, we don’t make small plans.” The store will boast more than 20,000 records, many of them plucked from the collections of private dealers like ‘funk archaeologist’ Dante Carfagna and Courtland Green. “These aren’t people going to Hillside or CHIRP and selling wares on a regular basis,” Shipley says. “What you’re getting into is untouched stock that hasn’t been picked over a thousand times at the same ten fucking record stores for twenty years.”

Shipley and co. have been planning the store for the better part of the year, originally hoping to open around Christmastime. Shipley believes a one-day store can offer the kind of content that a permanent business can’t afford to stock. “We have tremendous stores, but there’s certain limitations to having a store that has so much overhead, staff, and all these things,” he says. “We’re going to be able to be a little more flexible, so we can carry a really wide variety of LPs and 45s and not have to worry about, you know, making all of this money or we go out of business.”

Numero Group plans to release two albums for Record Store Day. “Local Customs: Pressed at Bodie” is a sixteen-track collection of soul, funk, rock and folk drawn from the tapes of a defunct Cleveland vinyl-pressing plant. The compilation will be available in super-deluxe vinyl, CD and on cassette at most participating shops. Numero Group’s storefront tables will also feature 100 pressings of an exclusive Eccentric Soul 45 about whose contents Shipley says only, “that’s a surprise.”

Finally, Numero Group plans to make the airwaves jump to the beat of seventies soul with its one-day live radio show consisting of “all manner of weirdness,” from old commercials and air checks by Chicago DJs to a whole hour dedicated to unreleased tunes from the Numero Group vault. The only thing Shipley worries about is that the store will be too much of a good thing. “The big worry for us is to make sure the fire marshal doesn’t come in and shut us down because we’re anticipating some pretty insane crowds.” (Benjamin Rossi)