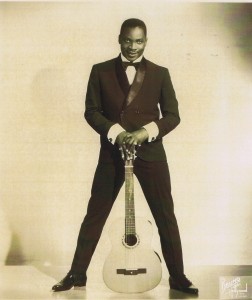 Taking the stage name The Mighty Sparrow doesn’t seem necessary if you already go by Slinger Francisco. Due to the Grenada-born singer’s penchant for constant movement, dancing and shaking while performing, his peers offered the nickname as a distillation of the man’s stage presence. That was over fifty years ago, but the Sparrow hasn’t slowed his dissemination of calypso music during that time.

Hitting as many continents on each of his tours as possible, the New York-based crooner has been able to adapt his music over time, taking cues from island stars as much as American jazz singers. What’s remarkable about the Sparrow’s recorded output is that mid-fifties’ recordings sport references to salacious women as much as political awareness and taxation. Releasing “Jean and Dinah,” a song touching on the oldest profession on earth, the Sparrow predated Max Romeo’s “Wet Dream,” a song censored by other island nations, by more than a decade.

Apart from dealing with base human desire, the Sparrow began issuing songs detailing island independence before Sam Cooke went and wrote “A Change Is Gonna Come” and Ornette Coleman declared musical independence on 1960’s “Free Jazz.” All politics and gender relations aside, the Sparrow’s persisted through the wave of musical innovations since the beginning of his career. Granted, the calypso he deals in has been updated a bit with general availability of electronic instrumentation and soca’s popularity cropping up a few decades ago. Even a few recent health problems haven’t impeded the performer’s penchant for booking shows or keeping up with new music. And seeing as Obama recently declared his bid for re-election, the Sparrow’s almost required to follow up “Barack the Magnificent” with a tune suited to the incumbent’s place in history, making retirement an idea to be dealt with off in the future. (Dave Cantor)