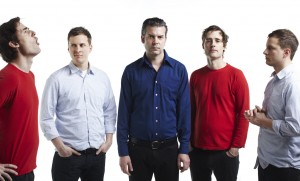 There’s an act—Captured! By Robots—in which a principal player built a few robots to perform musical gestures. Instead of the end result approaching the magnificence of robots playing robotic-sounding rock tunes, it’s just a punk derivation. Battles, a New York City ensemble wheedled down to three members since Tyondai Braxton’s departure, actually sounds like robots composing and enacting those writings. Instead of a cold “2001” feel to the proceedings, the band peppers its mechanical-sounding works with a repetitious smattering of vocals, which in the past were contributed by band members.

While the group’s forthcoming “Gloss Drop” (Warp Records) was recorded with Braxton in tow, he jumped shipped near its completion. Forced to reassess not just the tracks which were laid down, but Battles as a whole, the remaining members opted to rework the songs they’d set to tape and invite a handful of vocalists to fill in any spaces vacated by Braxton’s wide-reaching musicianship.

Fittingly, Gary Numan crops up on “My Machines,” a vague homage to his “Cars” from a few decades back. In 2011, the British singer retains pipes to compete with Battles’ frenzied pace. Complexly patterned keyboards move the song towards a sometimes awkward fusion of jazz and overblown stadium acts from the late seventies, but in a fitting manner. It’s an aural distillation of electronics brow-beating warm-blooded animals into submission, demanding utilization and constant use. Ahh, Twitter.

Musically, “Gloss Drop” isn’t a substantial step forward for Battles. In the future, though, the release will surely be assessed as a pivoting point on which future works will be hung. Until that time, the new disc includes enough contorted rock stuff to settle prog fans—and fans of thoroughly thoughtful music—until there’s another Roger Dean gallery show somewhere. (Dave Cantor)