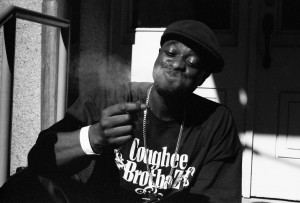 Devin the Dude is a specific kind of stoner. The Houston-bred MC chose to open what would become his most lauded disc, 2002’s “Just Tryin’ ta Live,” with a track on which an alien named Zeldar pontificates on reasons for returning to earth in order to score another bag of that sticky green stuff. Devin’s character seems to be a distant relative of Madlib’s Quasimoto. But, if you’re in the rap game, there’s a good chance you enjoy smoking every once in a while. Or whenever you grip the mic.

With his career centered on getting wasted and picking up stray women, listeners might be skeptical about the quality of Devin the Dude’s recorded lineage. Linking up with none other than Scarface and eventually DJ Premier and Dr. Dre should put all involved at ease. Reaching so far into Texas, the aforementioned production stalwarts christened Devin, granting him musical backing befitting the G-Funk era. While the Dude retains a style unique to the Rap-a-Lot Records crew, his artistic inclinations are purely West Coast, stretching up the 101 from LA to the East Bay where Mac Dre was mining similar sonic tapestries, but doing so with the aid of MDMA, something Devin hasn’t copped to in song.

It’s been more than a decade since the Dude began recording as a solo act under his own name and hearing a wealth of new approaches to music isn’t on tap when he takes the stage. Any MC who can get out lines best accompanied by a wide-brimmed hat, like “Ohio, it’s kinda nice/been there once, got my dick sucked twice,” and has done so consistently for so long deserves an audience: one with glazed eyes and a discernible sense of humor. (Dave Cantor)