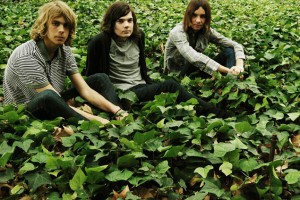 Maybe Silverchair started out this way. Tame Impala, an Australian three-piece mining psych indulgences and fronted by Kevin Parker, earned a bit of attention for last year’s “Innerspeaker.” The title alone might leave smoky rooms filled with long-haired layabouts contemplating the deeper meaning of human interactions. And while the band’s music references everything stoners desire from a rock troupe, a number of more established acts out there jam pretty similar fare into our collective ears.

For example, from an equally surprising Stockholm, Dungen’s been releasing well-wrought pastoral psych tracks for just about a decade. Relating lyrics in Swedish haven’t disallowed the group from making inroads in the States, though, mostly with gnarly looking door guys and booking agents. Still, listeners would need to rifle through the ensemble’s recordings, working back to 2004’s “Ta Det Lugnt” to find anything listenable. So seeing Tame Impala on the touring circuit’s almost as good, even if the Aussie band is gas-station swill to Dungen’s intelligentsia brew. Picky psych aficionados know the difference, while droves are sure to crowd into two nights worth of performances the Perth trio’s scheduled in town.

Since “Innerspeaker” was released just about a year ago, the recent release of “Why Won’t You Make Up Your Mind?” as a single reeks of obvious capitalism. What’s more, the song’s just another staid love song besotted with leftover paisleys from Lower Haight. If nothing else, the trek from Perth points towards this cohort’s determination to make it in an American way. And since Tame Impala’s gone and figured itself significant enough for a two-night stand in Chicago, it might be setting itself up for a minor-key psych success if Parker’s songwriting can advance beyond passable approximations. (Dave Cantor)