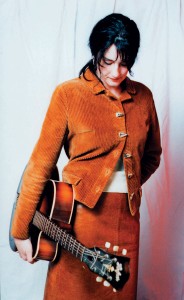 2011 marks twenty years worth of recording from Medway, UK-affiliated singer and band-leader Holly Golightly. Surely, the name’s ripped from literature (or film, if you’d like), but Golightly’s creative lineage intertwines with a bizarrely prolific bunch of poets, would-be artists and theoreticians. For 1991’s “Girlsville,” Golightly, who was then fronting Thee Headcoatees, ostensibly appropriated a Billy Childish approach to antiquated R&B, going so far as augmenting the guy’s band name and recording his compositions. Childish’s career, pushing back to punk’s initial wave, doesn’t just encompass a range of garage interpretations. He’s released more volumes of poetry than can be easily wrangled in a single collection, penned Stuckist polemics against sharks floating in formaldehyde and worked with Golightly in a number of settings.

About the same time Golightly ditched Thee Headcoatees, she went and recorded “In Blood,” an album pairing her with Childish. Resulting in the expected combination of garage, blues and simplicity, the duo’s slinky songs should have placed them in a league with folks like the White Stripes, who were poised for international success back then. The title track off the Brit duo’s 1999 album issues forth a dumb garage stomp at a quick pace. Sentimentalizing the revulsion behind carnal relationships, Childish and Golightly sing for something like three minutes about not really needing each other in most situations. Whether or not ideas like that being related over a stilted sixties rock beat lessens lyrical impact doesn’t matter. Rock ‘n’ roll, in its essence, is abandon. Hearing the pair (almost) harmonize while singing “I want you to meet me in blood” over and over again trumps the faux-emotional triumphs of Coldplay, or whatever dead-eyed college students listen to now.

Maybe Golightly and Thee Headcoatees were a weird puppet/art-project. Even if it was, since becoming a headlining act with Lawyer Dave as accompaniment, Golightly’s refined a stately blues music which should appeal to Bloodshot Records fans. (Dave Cantor)