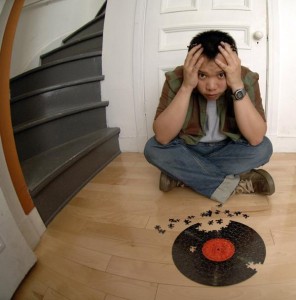 Having worked in collaborative terms for his last release with the Slew, Kid Koala jettisons his accompaniment for a trip to Chicago. Not sporting a new release to tour on doesn’t leave the DJ short on material. Armed with a variety of approaches to working two turntables, Kid Koala as frequently trucks in vaguely comedic terms as he does in spliced-together brilliance.

Off his first long-playing album, Ninja Tune’s 2000 “Carpal Tunnel Syndrome,” “Nerdball” sticks out a bit for its dexterous cuts interspersed with brief vocal snippets. What’s remarkable about the two-minute composition, apart from it being a miraculous display of technique, is Kid Koala’s empathizing with geeks. Opening the effort’s a brief clip from “Revenge of the Nerds” so fully transformed it ranks alongside drum samples as percussion. Of course, listeners are granted time to take in the quote as it points to a lifetime of nerdom. Spinning out recognizable sounds into something new has been the DJ’s job since the genre’s inception. Separating this Canadian beat maker from his peers, in addition to all that humorous fare, is Kid Koala’s penchant for manipulating a melody’s pitch, taking horn solos and arriving at some new woozy conclusion. Regardless of his aural contributions to performance, let’s hope there’s a bit of costuming as well.

As peculiar a spectacle as Kid Koala aims to provide, locals Cave are set to open with a Chi-specific interpretation of krauty psychedelia. It’s as robotic as the group’s name is Neanderthal. But with conceptual tendrils stretching into minimalism (check out Cooper Crain’s Bitchin’ Bajas project), improvised sections of the band’s compositions possess the potential to surprise listeners as well as performers.

The show’s one of two scheduled dates celebrating Ninja Tunes’ twentieth anniversary—its follow-up comes May 20 with Blockhead in the featured spot. (Dave Cantor)