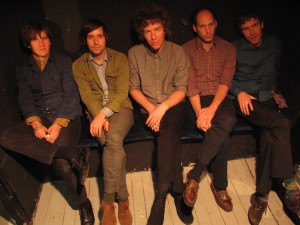 Separating Crystal Stilts from the hordes of other groups turning in updated sad-sack-sounding rock music equally indebted to the Velvet Underground and the Troggs is this ensemble’s ability to make that sinister stomp sound appealing. Crystal Stilts could easily turn into another dour, mock Ian Curtis tribute. Instead, there’s enough jangly propulsion to wrest the band from lame complacency.

Turning in an EP through Woodsist didn’t mean Crystal Stilts were set to add in some acoustic guitars or overt references to beaches—thankfully. And even dealing with Slumberland for its two albums, most recently “In Love with Oblivion,” hasn’t blunted the ensemble’s individuality, because really, most of the label’s output is cutout-bin material.

Regardless, “Oblivion” seems to comprise a spate of songs dealing with dissonance between nature and the life human beings have built up through industry—there are mentions of trees, the sun, the moon, shackles and cityscapes. While discussing each phenomenon, listeners should be able to notice how taut and tightly drawn the Stilts’ simple grooves have become. Nothing hap-dash cropped up over the course of earlier releases, but works like “Invisible City” and its martial beat sound more precise than most other similarly minded groups could summon. Still, the ensemble comes off roughly the same as it did on “Prismatic Room,” an earlier success, despite it being weighted down by phrases like “unconscious currency.” There’s nothing in play here to stun virtuosos. But there’s not supposed to be, a pair of other groups performing bear that out. Opening for the Brooklynites are Eternal Summers and the Beets, who strolled through town just a few months back. (Dave Cantor)