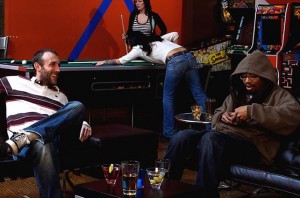 Artistically, it might be inconsequential that Columbus-bred, Philly-based producer and DJ RJD2 composed the theme for AMC’s “Mad Men.” But that’s a much easier reference for folks to grasp than saying he was in Soul Position. What writing that piece of music for television has done, though, is to move RJ from music’s periphery into its relative mainstream.

Coinciding with the strings and bombast now beamed into all those homes on Sunday evenings was a stylistic departure from beats and samples. Over the course of 2007’s “The Third Hand” and its 2010 follow-up, “The Colossus,” RJ dumped most of his hip-hop-related focus and transformed his act into something more palatable for folks who favor guitars and soul music. He caught some flak, didn’t seem to care, toured each album with a band and was able to come out on the other side unscathed.

It’s curious he then recorded a DJ set for “Live at the Rave,” which was issued during April as an audio set as well as being packaged in DVD form, eschewing most of his latest works. Granted, the boom-bap-related fare is included. Off “Hand,” “Get It” finds inclusion as it recalls his earlier rap-related efforts. “Let There Be Horns” is all acrobatic cuts and MPC bearing no resemblance to the pop stuff it was surrounded by on RJ’s latest studio disc. But “The Glow” sneaks in there, including RJ’s crooned chorus. With the cherry-picking approach to the DVD, it’ll be interesting to see how the DJ is able to assimilate the wildly different compositions into a set finding him planted behind two turntables as opposed to being supported by a handful of musicians. (Dave Cantor)