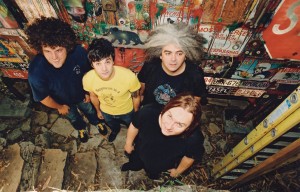 Midwiving nineties alternative styles falls to the Melvins or Nirvana depending on what sort of history one’s reading. The reality is both bands sprouted from Western Washington and were initially wholly detached from metropolitan concerns. What’s usually not detailed, though, is the back-and-forth relationship the bands shared—Melvins’ drummer Dale Crover plays on “Bleach” and Kurt Cobain lent some studio time to the Melvins’ 1993 “Houdini.” Almost twenty years later, the Melvins are still trucking out that major-label debut in its entirety. And yes, the band already released a live rendition of the album a few years back. This tour, however, finds Buzz Osborne and company detailing the entire era leading up to and including “Houdini.”

Just skirting 1989’s “Ozma,” which counted Shirley Temple’s daughter on bass, the Melvins aim to recreate their creative march towards major-label reckoning. Beginning with the “Eggnog EP,” which really has nothing to do with that good ole holiday spirit, the ensemble slowed down its punk and metal mélange to the point that its approach ranks as the starting point for groups like Eyehategod. Following that, the litigation-inspiring “Lysol” arrived with stoned drones like “Hung Bunny,” making Sleep’s “Dopesmoker” sound like an afterthought. An Alice Cooper cover even slips in there as the band prepared to engage Atlantic Records for its following long player.

A secret history of American underground rock stuff finds itself represented over the course of these three discs. Whether or not fans need to hear each in its entirety’s another question. Tickets are a bit steep, but two bucks a minute to hear “Charmicarmicat” is probably worth it. And if it’s an especially slow rendition, the show’s a bargain. (Dave Cantor)