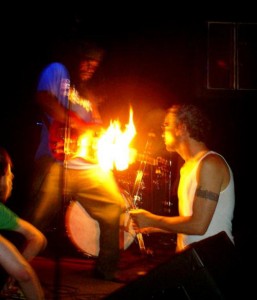 Sonically speaking, Puffy Areolas aren’t at all removed from the recordings which comprise the Toledo/Cleveland ensemble’s first long-playing album, Siltbreeze’s 2010 “In the Army 1981.” It’s odd given Damon Sturdivant, the band’s guitarist and songwriter, is its only remaining player. But that only speaks to the guy’s singular vision for dirtbag psych stuffs. Since he shuttles back and forth between Midwestern safehouses, bassist Drew Hart becomes the group’s mouthpiece ahead of the quartet’s appearance at HoZac’s Blackout Fest this coming Saturday.

“I don’t care if I ever make a dollar playing music,” Hart begins over the phone as the sound of his 5-year-old springs up occasionally in the background. There’s a heated chess match in progress as he answers questions. “I don’t need the money, I’m self-sufficient. People just need to hear my bass since there’s no one else playing music that sounds like this.” A pause follows, one which might be misconstrued as pregnant with pomposity. “Birds of Maya are close—all those one-note jams.”

Residing in a slow-to-gentrify neighborhood on Cleveland’s east side, Hart ranks as one of the city’s slumlords, buying up stashes of land with dilapidated, hundred-year-old homes seated on them. Restoring the buildings takes up enough time to count as a day job, but affords the 29-year-old bassist enough time to explore any number of hobbies, including horticulture.

“I wouldn’t call it farming,” Hart demurs. “It’s not acres of land or anything, but I’ve been growing vegetables for a few years and eat pretty well off the yields.” Prior to cultivating food for a vegetarian lifestyle seemingly at odds with the squalid qualities of Puffy’s music, Hart preened bonsai trees and belonged to a small community of folks who gathered at public greenhouses in the area to display their work.

Tying Puffy Areolas’ work into a Chicago rock scene is its relationship with local imprint Permanent Records. After performing at a Record Store Day event the label hosted a few years back, lines of communication remained opened, eventually resulting in a split single with Purling Hiss, a Birds of Maya side project, which was released in April.

“That record, it must have been the second or third time we ever played it,” Hart recalls. The long, meandering build on “My Hell” functions as a blueprint for most of the band’s compositions. Taking any sort of simple, stripped-down blues progression, wrenching it from melodic complacency and turning it into a pulsing trip between two notes, the four-piece gets into group improv before songs peter out. In part, the low-end theory behind Puffys—simple, repetitive and almost funky rhythms—is what enables the band to create such monolithic live renditions of its catalog. Allowing for Sturdivant to lose his nut, toss his six-string into the crowd, do a little dance, retrieve his instrument and pick up where he left off is predicated on Hart and drummer Lamont ‘Bim’ Thomas having the ability to hold the music together.

Before getting too much deeper into the band’s sordid history, there’s an interruption on Hart’s end. “Daddy, it’s your move,” a tiny voices calls out. It is time to go, but mentally stimulating thousand-year-old board games won’t get in the way this weekend. During the two-day HoZac sponsored festival, Puffys will be joining any manner of punk-related ensembles, including a few acts from the seventies. Chicago’s first-wave punk groups, while historically significant, don’t rank alongside comparable groups from most other Midwestern scenes. They weren’t all bums, but Tutu and the Pirates’ appropriation of the Dictators/Ramones axis doesn’t do much apart from recasting an East Coast-style in a Midwestern town. Quibbling about an occasionally spotty lineup when HoZac hasn’t hosted a blowout of this nature in a long while resounds hollowly. The Spits, a Michigan cum Seattle troupe just as likely to be dressed as robots as they are astronauts, headline Friday evening while Bostonians Nervous Eaters top Saturday’s bill. No, it’s not a Pagans’ reunion, but there’re enough top-shelf groups to draw in assorted scumbags from Chicago and beyond.