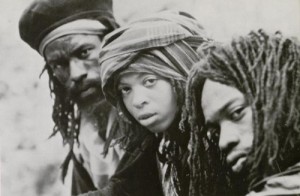 There’s an eighties feel to the entirety of Black Uhuru’s catalog, which actually began during the waning years of the previous decade. Trucking out its first long-player in 1977, only to have it remastered a few years later, indicates the fickle nature of the Jamaican recording industry. Everything goes around twice—at least twice. Thankfully, Black Uhuru, which is in its umpteenth reincarnation, was held together by Derrick “Duckie” Simpson, who thoughtfully handpicked regular replacements with startling talent, fitting seamlessly into a group which should have lost its identity. It didn’t. Instead, the various singers who come to grace each album stake out specific eras in the band’s history. After losing Don Carlos, a name reggae fans should already be familiar with, Simpson and Michael Rose embarked on a spree of at least three albums’ worth of required listening. The last in that series, 1981’s “Red,” was bolstered by Sandra “Puma” Jones’ contributions on heavy efforts like “Sponji Reggae” with its odd and unforgettable chorus. It’s not a digitized effort, though, or even one reeking of dancehall influence. Just modernized roots. Of course, JA recording arrangements being what they are, that lineup didn’t last all that long and by the second half of the eighties, a new batch of singers joined Simpson before Carlos returned to the fold for a stint during the early nineties. Without defining itself through overtly politicized lyrics, like England’s Steel Pulse, Black Uhuru has been able to remain a favorite with listeners who don’t require history lessons along with ample song craft. And regardless of who shows up to croon for fans on Wednesday, Black Uhuru has enough top-tier material to please pretty much anyone in attendance. (Dave Cantor)