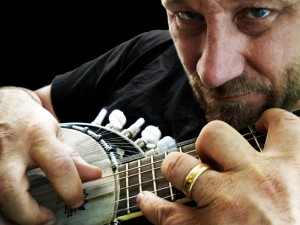 Excised from American popular music more than fifty years ago, the banjo isn’t generally perceived to possess secrets to musical freedom or self-realization. Paul Metzger, an acoustic instrument tinkerer and performer, hasn’t felt the sublime through playing any number of his augmented banjos or guitars. His understanding of the instrument, however, pushes past the normative applications of its vocabulary and attempts to incorporate ideas from non-Western traditions.

“There’re Indian ragas that are 3,000 years old which have a few short compositional phrases and a system of rules and conventions that go along with it. People have been chasing those tunes down for thousands of years,” says Metzger over the phone from his home in St. Paul. “The infinite is available within the finite experience. I’m not real prolific with compositions, because they’re always developing and there are always surprising areas for me to come across. For me that’s a real huge thing.”  His exploring Eastern modes of improvisation began while Metzger was still playing in TVBC, a three-piece rock group coming off like a stoned SST band lost in open-ended modal romps. “Gandhi,” off the band’s 1991 album “Gone,” sounds as if the Sun City Girls’ Richard Bishop called up the Meat Puppets in 1983 for backing support.

Allowing Metzger the ability to explore the vastness of any one musical theme are the instruments he’s doctored over the last thirty years. Hearing a musical figure in his head hasn’t always been easily translated to standard acoustic instruments, necessitating his supplementing its physical form. “I’m on my third banjo now, it’s got ten strings. I’m slowly letting that one evolve. My previous one had a lot more strings on it, but it was a pretty crappy banjo,” Metzger says. With all the variables in building instruments, attempting to replicate a sonic thought from banjo to banjo should be pretty difficult. “Each banjo’s tuned differently, but once I know my way around a particular tuning and I’m comfortable with it, it’s not a big leap to go after a theme I’ve played before.” Taking what he’s learned from earlier experiments in instrument building, applying each to new situations makes Metzger’s approach to building his acoustic accompaniment a physical manifestation of his concepts on improvisation and endless variation.

With such heavy talk of infinity and its implications in the musical world, one might guess Metzger to be a voracious digger, someone excavating old recordings and lauding lesser-known instrumentalists. Dock Boggs, a featured banjo player on “The Anthology of American Folk Music” and an avowed entertainer, doesn’t come up in conversation. Neither do like-minded performers like Bill Orcutt or Henry Flynt. Instead, Metzger professes a love of song craft and modern works from the likes of Joanna Newsom or Low. His admitted distance from anyone trucking in acoustic improvisations might be thought a hindrance, but in reality, Metzger’s distance from contemporary avant-gardists has likely emboldened his development of a unique musical vocabulary.

Metzger’s singular lexicon, though, might work against him. Apart from focusing on an instrument most Americans would perceive as antiquated, his sometimes difficult melodic progressions arrive sounding doubly odd to unprepared ears. “It’s really difficult to book shows in the States. The economy and not being popular mixes into not being able to get guarantees. It’s all kind of a question mark when you head out on tour. Things are completely different overseas—things are usually government funded,” says the multi-instrumentalist. “There seems to be a wider appreciation for the solo acoustic improviser in Europe. Audiences have a much wider age demographic—there are usually cats at shows older than me. And I’m an old guy.”

Persistence might play a role in Metzger’s continuing artistic achievements. But his admiration for creative endeavors as well as an enthusiasm for performance will likely direct further career developments.  “I love to collaborate,” he says. “I’ve worked with an oud player in Amsterdam and did some stuff with a South Indian vocalist. I like to do that, it gets me out of the solo-isolation world. It’s a conversation.” Performing unaccompanied, Metzger doesn’t dialogue with other players in attendance. Instead, he attempts assimilating an unruly range of influence. And that probably explains why it’s possible to hear his work on banjo and mistake it for one of those thousand-year-old ragas.