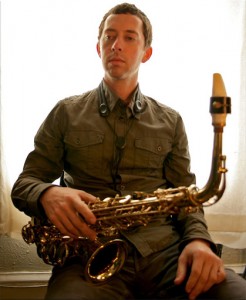 Listening still ranks as one of the most important aspects of performing. Ask Pauline Oliveros, she agrees. Aram Shelton, a onetime local who now resides in the Bay with his alto sax but makes frequent pilgrimages back to Chicago, is well acquainted with the necessity to bleat out incomprehensible melodic progressions, but then rein it in and allow enough room for his cohort to expound related musical ideas. Affiliated with everyone from Weasel Walter, another East Bay transplant, to the Functional Blackouts, Shelton’s dates as a leader aren’t as varied as his other recording concerns, but hint at the ability to augment his tone and style on demand. Working with the Portuguese imprint Clean Feed, Shelton’s brought out “There Was…” with his group Arrive. The band, a quartet including Jason Adasiewicz on vibes, Jason Roebke with his bass and sometime-Vandermark associate Tim Daisy on drums, turned in six tunes for its latest release. Strikingly broad for an offering hemmed up in avant-jazz terms, the quartet works in airy tones as much as frenetic improvised passages and even tosses in a few drum solos. “Frosted” finds Daisy being featured for a romp over his toms, somehow avoiding overt African references, exemplifying Shelton and his group’s ability to adroitly assimilate influence without sacrificing the personal. Marshall Allen and John Gilmore, from Sun Ra’s groups, don’t function as the center to Shelton’s sound. It’s lighter, even sidestepping Art Ensemble ties. The band leader’s new(ish) digs out west, though, might serve as a better point of reference—Mills College is out there. But even Anthony Braxton doesn’t hold sway over Shelton’s approach to music. He’s a rare contemporary player capable of adding in some Euro-styled experimentalism with rhythmic ideas, no doubt, gleaned from his work in the Windy City. (Dave Cantor)