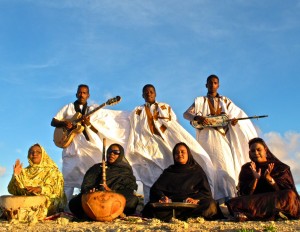 When black jazz and rock players looked to their ancestral homes during the sixties, the result, pretty frequently, was to diminish Western influence and supplant it with melodic and rhythmic variations derived from Eastern sources. Claiming the merger experimental seemed odd given that after reconnecting to assumed roots, a studied primitivism was often a result. Since the Seattle-based, Sun City Girls-helmed Sublime Frequencies label has sought out musicians working from any number of African regions, the label’s been able to disseminate a handful of works from players who were raised in non-Western musical traditions, but found electric rock workouts to their liking. One of the better-traveled ensembles from these newfound pools of talent is Group Doueh, a Dakhla/Mauritania band counting a family at its core. Bamaar Salmou, the ensemble’s lead guitarist, his wife, son and anyone else he feels necessary have trekked through Europe a bit and worked the States in the past. For this visit, Group Doueh tours its latest recording, “Zayna Jumma.” In stark contrast to Sublime Frequencies’ earlier releases, like 2007’s “Guitar Music From the Western Sahara,” this newest disc sports a significantly higher production value. While the tinny guitar sound remains taut, Bamaar Salmou’s meandering sounds fuller, if not necessarily more realized. Becoming a part of the West’s label system hasn’t changed the band. After all, Group Doueh was founded and existed independently from that context, which points to the difference between contemporary African groups working with Western music when contrasted to supposed sixties revolutionaries. Stateside, an alternative system needed to be established and maintained. In West-African countries, a network already exists. The States are just now catching up to it. (Dave Cantor)