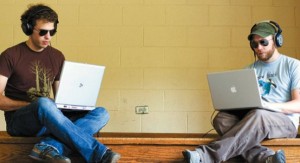 It’s interesting to hear Steve Reidell, one half of the group The Hood Internet, say that “people were over this shit years ago” about his own style of music, mashup. That’s not to say that he doesn’t have a point. The mashup is a concept that isn’t completely foreign: it’s basically taking multiple different songs and making them one. The internet is a facilitator of the genre’s popularity, with thousands of artists easily compiling and distributing mixes online.

The Hood Internet, comprised of Aaron Brink and Reidell, has created six “mixtapes” of its music, available solely on the blog of the same name. “I don’t think that we would have an audience without the internet,” Reidell says. “In 1997 It wouldn’t have hit in the same way.”

In their work, hip-hop and rock become enjoyably entangled. The sheer volume of songs they’ve created demonstrates their knowledge of music itself. When asked about how they continue to come up with ideas, Reidell replies that “We just listen to a lot of music. It’s something that’s ingrained in our lives.”

The group is apparently trying to get a foot within the physical music world as well. “We’re actually working on a Hood Internet record right now,” Reidell says. Not only will it be a physical release, but it will also be original work. Reidell explains that “It’ll sort of echo the sentiment and the notion that The Hood Internet does, but the songs will be completely new.” They aren’t totally unfamiliar with the material music world, as both men used to be in a Chicago band called May or May Not prior to The Hood Internet.

One thing that they are certainly familiar with? Touring. They’ve been doing it for the past two or three years, and this weekend is no different. Reidell and Brink have spent the weekend mashing in Chicago, opening two sold-out shows for Matt and Kim at The Vic. (Maureen Clancy)