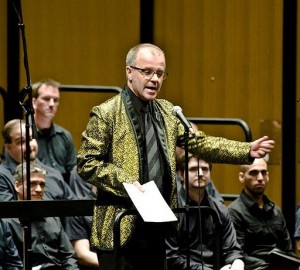 With all of the attention focused on conductor Carlos Kalmar’s recent Carnegie Hall triumph and his newly expanded role in the Grant Park Music Festival, it may be easy to overlook the significant contribution that Christopher Bell has made to the festival during what is now a decade of directing the Grant Park Chorus.

Bell has transformed what was already a fine chorus into an instrument of remarkable transparency and flexibility which is spectacularly showcased on the just-released Cedille Records release “The Pulitzer Project” where the chorus is heard performing the Pulitzer Prize-winning works William Schuman’s “A Free Song” and Leo Sowerby’s “The Canticle of the Sun” along with Kalmar and the Grant Park Orchestra. The chorus itself, by itself, will be the centerpiece of a special indoor Harris Theater a cappella concert of contemporary American choral music this week while Taste of Chicago is in full noisy swing outdoors.