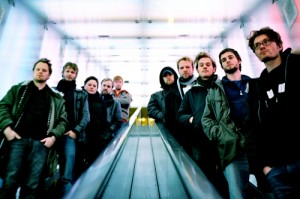 There’s almost no use in attempting to define the music Jaga Jazzist, a Norwegian uber-combo consisting of something like nine members, depending on when you catch the band live, works up. Beginning in 1996 with “Jævla Jazzist Grete Stitz,” the ensemble made clear that anything from jazz to rock, European folk musics and electronica were on the table. At times, as with “Serafin,” Jaga Jazzist could be compared to Soft Machine during its more sedate moments. Jumping ahead a few years to 2001’s “A Livingroom Hush,” the band sounds like the actualization of Kieran Hebden’s jazzy dreams. The conflagration of acoustic instrumentation skewed towards a jazz tradition, and a European conception of dance music and electronics works surprisingly well. As Jaga Jazzist headed into record its third work, “The Stix,” all involved minimized the jazz influence and turned towards something like post-rock. Sharing a stage with Tortoise wasn’t a mistake. There was still a jazz flair to it all, simply due to the persistent inclusion of a horn section, but European composition became a focus, densely orchestrated portions of “Aerial Bright Dark Round” standing in stark contrast to earlier, more playful works. 2010 marked the band releasing its newest disc with assistance from Chicagoans John McEntire and Paul Nilssen-Love. With those collaborations, the Norwegians put together another album of surprisingly varied music, coming off as an updated Frank Zappa, who was in reality just trying to update Edgar Varèse. So, does that make Jagga Jazzist modern day avant-gardists of the highest order? Maybe. But even if it doesn’t, the Norwegians might suit those listeners who find Battles enticing, but a bit too aggressive. The band, without setting up any sort of sonic boundaries, though, has a sporting chance at entertaining just about anyone with an open ear. (Dave Cantor)